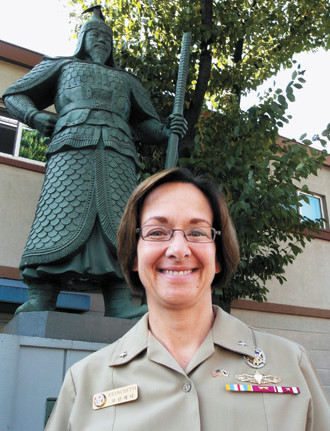 Rear Adm. Lisa Franchetti, the new commander of U.S. Naval Forces Korea, speaks of her role Wednesday in front of the statue of Korea’s legendary Adm. Yi Sun-shin at her office in Yongsan Garrison, Seoul. By Chang Se-jeong

The JoongAng Ilbo conducted an exclusive interview with Franchetti on Wednesday, where she spoke of her priorities as the commander of U.S. Naval Forces Korea, her experiences as a female naval officer and her high regard for Choi Yoon-hee, the new chairman of the Joint Chiefs of Staff.

“My No. 1 priority here is readiness,” she said. “My job is to be ready at all times to support the command of the United States Forces Korea, and we do that here at CNFK by working closely with ROK Navy in continuing to develop our [inter-operability] and maintaining our operational proficiency.”

Franchetti added that maritime security and freedom, and access to the global economy, are necessary for regional stability and economic vitality in the region.

“I think one thing that we see here in my role as the [Commander of U.S. Naval Forces Korea] is to continue to develop a positive military-to-military relationship that is based on these common interests to protect the freedom of the seas,” in order to enhance regional stability.

After visiting Korean fleets, she said that the people of the Korean Navy “are also extremely professional and talented and they bring the ROK Navy to the front and able to be the first line of defense for the Republic of Korea.”

“I always used to say that a ship is an empty piece of metal that can’t really do anything on its own, and it’s the sailors who bring it to life,” said Franchetti.

Franchetti arrived in Korea in August with her civilian husband and 7-year-old daughter, and took command on Sept. 10. Though she had visited the peninsula twice before, this is her first time serving here.

A New Yorker, Franchetti graduated with a journalism degree from Northwestern University as well as the Naval War College.

“I find that although I never was a journalist, the skills I learned there, the inquisitive mind, the interdisciplinary studies have really helped in my service to the Navy and our nation.”

She was commissioned in 1985, while at Northwestern, through the Naval Reserve Officer Training Corps Program and previously served as military assistant to the secretary of the Navy in Washington, an aide to the vice chief of naval operations, and an assistant surface operations officer on the USS George Washington Carrier Strike Group.

And though she is the first female component commander here, she said she is certain she will not be the last.

“When I started my naval career 20 years ago, our navy looked very different than it does today. So, like my male counterparts, I work very hard to establish by warfare qualifications, develop my leadership skills and get as much experienced as sea as possible .?.?.”

For other aspiring naval officers, “I usually advise the men and the women the same way,” she added, “which is to work hard, focus on your qualifications and become a very good tactically proficient officer with as much experience at sea as possible.”

Franchetti also praised Admiral Choi Yoon-hee, the first Navy chief to be appointed as chairman of the Joint Chiefs of Staff. “In the Navy, we have witnessed first-hand his leadership and vision in leading the ROK Navy and enjoyed a very strong relationship with [him] during his time as chief of naval operations,” she said. “We are very confident that in his new position, Admiral Choi would continue to promote strong interop [interoperability] and training exercises between the ROK and US military in all the services now.”

Franchetti also admitted to being an admirer of Admiral Yi Sun-shin (1545-1598), a Joseon Dynasty-era (1392-1910) Korean Navy commander known for his unmatched bravery and remarkable victories against the Japanese. She called Yi “an amazing hero,” adding that he is “inspiring to everyone in our Navy, your Navy, everybody across the world.”

Franchetti is a recipient of numerous honors, including the Defense Superior Service Medal, Legion of Merit, and the Navy and Marine Corps Achievement Medal, among others.

She expressed gratitude to the Korean people for the support they provide to the U.S. Navy.

“They’ve historically provided great support, and they continue to provide great support, and I am a beneficiary of that support .?.?. I am hopeful that my presence here and also in our own Navy will inspire both our young men and women to work hard, do their best and fulfill their service to the country in the best possible way.”