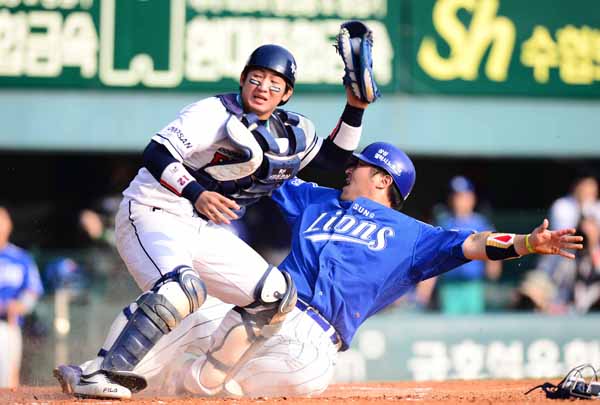 Choi Hyung-woo of the Samsung Lions, right, scores the second run of the game yesterday against the Doosan Bears with a sacrifice hit in the top of the fourth inning of Game 3 of the 2013 Korean Series in Jamsil Stadium in Seoul. [NEWSIS]

The Lions yesterday overpowered the Bears 3-2 in Game 3 of the best-of-seven series, held in Jamsil Baseball Stadium in southeastern Seoul. Despite the victory, however, the Lions still trail the Bears by two games to one. Game 4 will be held today at 6 p.m. in the same place.

The key player for the Lions’ yesterday victory was the 30-year-old lefty starting pitcher Jang Won-sam. “Losing Game 3 meant losing the series because we had already lost two games in a row at home,” said the Lions skipper Ryu Joong-il in an after-game interview. “Jang must have felt the pressure, but he completely overcame the tough situation.”

Jang has been good at Jamsil. His average ERA there this season was 3.27, with a 2-2 win-loss record, compared to his full-season ERA of 4.38.

Jang looked a bit nervous at the bottom of the first inning. He allowed a hit to the Bears’ leadoff hitter Lee Jong-wook, then let him reach second base with no out after a wild pitch.

But despite falling behind in the count 3-0 to Min Byung-hun, Jang got him out with a pop fly, then retired the next two batters.

He would allow only one more hit over the next five innings.

Only as his pitch count exceeded 90 in the bottom of the seventh inning, did Jang allow two runs.

After infielder Oh Jae-won then hit a double, the Lions skipper Ryu relieved Jang for right-hander Ahn Ji-man, but the Bears’ shortstop Son Si-heon drove Oh in with a single.

However, the following relievers, lefty Cha Woo-chan and closer Oh Seung-hwan, shut down the Bears’ offense in the next two innings.

Their third run came at the top of the seventh after a wild pitch from the Bears’ reliever Hong Sang-sam with a runner on third and one out.

“I know that he struggled against the Bears,” Ryu said. “But, when I look at his career, I believe he can do a better job in big games like this.”

Bae is the winningest active pitcher in the KBO with 116 total career wins.

“Our hitters, especially those who bat cleanup, such as slugger Choi Hyung-woo and Lee Seung-yeop, certainly need to be back in shape,” Ryu said. “They need to concentrate more on scoring chances and produce some RBI while our pitchers are doing their job well. One bit of good news is that it looks like they are coming back when I look at them batting in practice and in games.”

Before the game, fans got a surprise when the opening pitch was thrown out by President Park Geun-hye. Park, wearing a hooded shirt with the 2013 Korean Series logo on it, a pair of sneakers and a glove with the national flag printed on it, threw the first pitch from 10 meters in front of home plate.

Park is the fourth president to throw out the first pitch. Former President Chun Doo Hwan did it in 1982 at the season opening game between the Samsung Lions and MBC Chungyong (or “Blue Dragons”) and former President Kim Young-sam threw the first pitch in Game 1 of the 1994 and 1995 Korean Series. Late President Roh Moo-hyun threw the opening pitch at the 2003 All-Star Game.