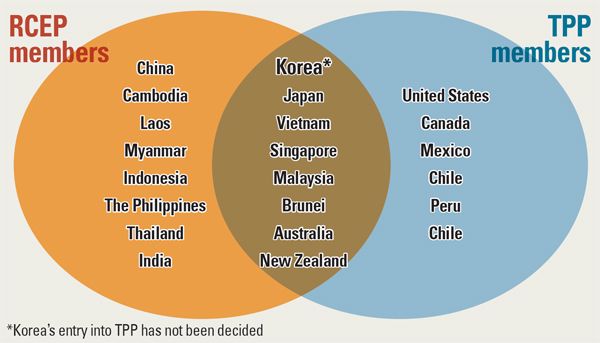 Korea is inching toward becoming a member of the much-debated Trans-Pacific Partnership (TPP), a United States-led multilateral free trade agreement, as signaled by remarks from top policy makers.

Minister of Foreign Affairs Yun Byung-se said at a parliamentary hearing two weeks earlier that joining the trade agreement was “only a matter of time.” His comments came just two days after President Park Geun-hye returned from a weeklong trip to the Asia-Pacific Economic Cooperation (APEC) forum and Association of Southeast Asian Nations (Asean) meetings, where she had been widely expected to make official Korea’s joining of the TPP but didn’t.

Then Park brought up the issue on Oct. 18 at an international conference in Seoul. Her idea was a bit broader: to link a Korea-China-Japan trilateral free trade agreement with other regional trade accords such as the Regional Comprehensive Economic Partnership (RCEP) and the Trans-Pacific Partnership (TPP).

“A large single market could be created through speeding up a Korea-China-Japan trilateral free trade agreement and linking it to trade agreements within and outside Eurasia, such as the RCEP and TPP,” she said at the 2013 International Conference on Global Cooperation in the Era of Eurasia in Seoul. She did not specifically talk about Korea’s entry into the TPP.

On the surface, Park’s proposal is meant to create one large, single market and bolster economic partnerships. But it also shows Korea’s desire to embrace both the United States-led TPP and the China-championed RCEP, to avoid conflict between two powers vying to take leadership of Asia-Pacific economic and trade integration.

Kim Gyu-pan, a researcher with the Korea Institute for International Economic Policy, says through the TPP Korea could enjoy the effect of bilateral free trade agreements with countries that Korea has yet to make deals with, such as Japan, Australia, New Zealand, Canada and Mexico. Should Korea gain TPP membership next year at the earliest, its yearly gross domestic product is expected to grow an estimated $45.8 billion, or 2.2 percent.

According to Peter A. Petri, professor of international finance with Brandeis University and a senior fellow at the East-West Center, joining a wider agreement means additional benefits even for trade flows covered by prior FTAs. That means if the Korea-U.S. FTA is embedded in larger agreements such as the TPP, the transactions between the two could be based on more efficient regional production chains that would generate more direct and indirect Korea-U.S. trade.

For instance, Korea’s textile exports could be processed into garments in Vietnam and sold in the U.S. under preferential tariffs, increasing Korea’s indirect textile exports to the U.S.

Still, experts warn Korea needs to take a prudent approach regarding the TPP given that the country is sandwiched between the U.S. and China and their contrasting ambitions. Korea has already entered the Regional Comprehensive Economic Partnership (RCEP), a China-led Asian free-trade bloc, and the prospect of confrontation between the two powers is what made Korea hesitant about jumping on the TPP bandwagon.

The RCEP talks include the 10-member Asean bloc and its six free trade partners - Korea, China, Japan, India, Australia and New Zealand. A clear advantage of RCEP is that all Asean member countries are on board already, and participants agreed in May to finalize the pact by the end of 2015.

“China may feel uncomfortable with Korea gaining a TPP membership, given the heavy investment and trade between the countries,” said Choi Seong-keun, a researcher with the Hyundai Research Institute. “Moreover, Korea joining the TPP may have a negative impact on future FTA and RCEP negotiations with China.” Korea began FTA negotiations with China in May 2012 and signed an FTA with the United States in March 2012.

Trade Minister Yoon Sang-jick’s comments on Thursday underscore the concerns. The Korean government “should consider not only economic but also political factors” when it comes to participating in the TPP, he said at a conference in Seoul.

While the Korean government has already signed and ratified a number of FTAs with other major countries or regions of the world, including the U.S. and the European Union, the impact of the Korea-China FTA is likely to be much more direct on the Korean economy.

While attending the Asean and the East Asia Summit earlier this month, Chinese Premier Li Keqiang reaffirmed Beijing’s desire to complete negotiations on the RCEP within the next two years.

Li suggested that there could be interaction between the RCEP and the TPP. His push for the RCEP demonstrated China’s fear that its role in regional economic affairs might be diminished should the TPP be launched, according to the South China Morning Post.

Academics cite another crucial dimension to Korea’s TPP entry: It should be seen from a strategic point of view, particularly because Japan is now on board. Korea’s neighbor only formally joined the negotiations in July to try to bring some reform to domestic economic policies, the so-called “Third Arrow” of Abenomics.

Japan hopes that by adding new FTA partners - the U.S., in particular - it will upgrade and expand bilateral and regional trade arrangements and avoid discrimination from other trade pacts, according to Jeffrey J. Schott, senior fellow at the Peterson Institute for International Economics. Although Japan’s entry into the TPP “complicates” talks, it also makes a big deal more likely because the country would increase the total size of the TPP market by almost 30 percent, he says.

Some have even gone so far as to dub the TPP a de facto U.S.-Japan FTA, which prompted some to worry that if Korea refused to be a member it will be alienated from the world’s biggest trade market, and that could potentially undermine Korea’s export competitiveness.

Choi of the Hyundai Research Institute says it is better for Korea to join the TPP at an early stage so it will have more leverage in negotiations. “Korea is an export-driven economy and participating [in the TPP] is definitely beneficial,” he said. “But the country needs to demand an exemption to protect some sensitive industries, such as agriculture.”

Schott of the Peterson Institute believes the TPP and RCEP are “complementary.” The two are “important super-regional initiatives, involving a large number of countries accounting for a substantial share of world output and exports,” he said at a recent seminar organized by the Korea Institute for International Economic Policy in Seoul.

What differentiates RCEP is that it will provide special treatment for poorer countries, plus exemptions for least developed countries (LDCs). Both initiatives cover extensive areas of economic activity, but the RCEP aims at softer commitments than the TPP.

Schott suspects the U.S. and China might pursue a hybrid approach to bridge elements of the TPP and RCEP. FTAAP, or Free Trade Area of the Asia-Pacific, which involves all of APEC’s 21 members, could serve as an “umbrella” for integrating pacts in the region and link the two biggest economic powers.