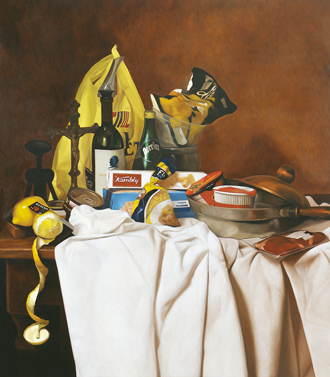 Thai artist Natee Utarit’s “Still Life with Grocery Food and Opus One” (2013) is part of his first solo show in Korea at Gallery Hyundai. It resembles a typical 17th-century Dutch Golden Age still life but consists of contemporary food, including Korean cup noodles. Provided by the gallery

Visitors to Gallery Hyundai in central Seoul nowadays could feel as if they were in a European gallery filled with 17th-century Baroque paintings.

They will see a group of still-life paintings that resemble those of the Dutch Golden Age, not only in compositions but also in calm, graceful hues. They will also see some paintings that depict dwarfs in Baroque costumes. They will be reminded of the Spanish master Diego Velasquez’s well-known portrait of a dwarf, who was the king’s jester.

But a closer look at these paintings will reveal that they are contemporary artworks tinged with sarcastic humor. The still-life paintings have contemporary food like cans, bags of snacks and even Korean cup noodles. And the dwarves resemble Southeast Asians rather than Europeans, carrying items of contemporary luxury fashion brands. They are part of a solo show of Thai contemporary artist Natee Utarit titled “Optimism is Ridiculous.” 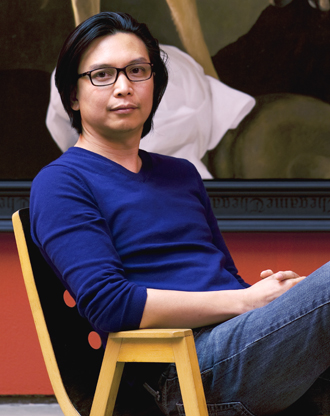 The portraits of dwarfs in the series titled “We Are Asia” are self-mocking portraits of Southeast Asians, including Utarit himself, according to the artist’s note.

Asked why he uses the style of 17th-century Baroque paintings, Utarit said, “I’d like to test various languages in my conversation through art. An abstract painting is not a proper language to express the chaotic and complicated conditions of contemporary society. The figurative paintings of the Baroque era are full of symbols and allegories. Their styles are realistic and symbolic at the same time, so I apply it.”

The 43-year-old Bangkok-based artist was in Seoul earlier this month for the opening of the exhibition.

He added he could change the style next year, as he has been testing various languages and styles.