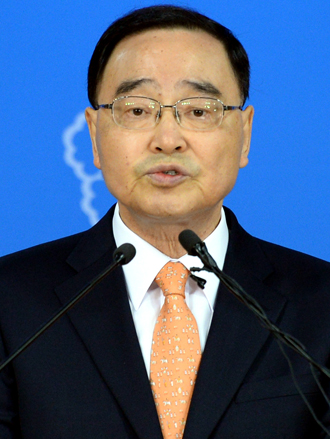 Prime Minister Chung Hong-won vowed in an address to the nation yesterday to identify the forces behind ongoing speculations that the top spy agency carried out an online smear campaign supporting President Park Geun-hye and disparaging her rivals in the presidential election last year.

“The government will take necessary measures as soon as the results of the investigation [into the National Intelligence Service’s alleged online campaign against an opposition presidential candidate] are released,” he said yesterday morning at the government complex in Gwanghwamun, central Seoul, in his first address since assuming the post in February.

“We won’t hesitate when it comes to holding [anyone who violated the rules] responsible. I humbly ask you to wait [and have] confidence in us.”

He stressed that continued confusion over the issue, already under investigation, “won’t help the national economy.”

Chung’s address comes amid controversy over allegations that the National Intelligence Service posted Twitter messages ahead of the election that supported Park and disparaged her rivals.

Democratic Party Chairman Kim Han-gill affirmed that the government is pushing ahead with a wide-scale project to assert Park’s innocence in regard to the NIS’s “illegal interference with the election.” However, the prime minister’s remarks only seemed to fan criticism from the Democratic opposition against President Park and the ruling Saenuri Party.

About two dozen first-term lawmakers with the DP issued a joint statement urging the entire cabinet to step down and for the Blue House to reshuffle all secretarial staff members.

In response, the Saenuri called the opposition’s move a “collective insubordination of the presidential election result,” asking the DP members to return to the National Assembly.

“Park Geun-hye’s presidential pledge to appoint government officials on a fair and equal basis has turned out to be a lie,” he said. “Rather, the geographical preference of the Blue House and other authorities is ever more intensified.”

According to Chun, 41 percent of those who hold high-ranking positions at the four-most-powerful government institutions are from the so-called PK region, an acronym referring to Pusan and the adjacent Kyongsang Namdo Province. Before 2000, Busan was romanized as Pusan, and South Gyeongsang Province was known as Kyongsang Namdo.

The PK faction had its political heyday under former President Kim Young-sam, from 1993 to 1998. President Park was born in Daegu and elected four times in Dalseong County inside the metropolitan city of South Gyeongsang. The “neo-PK era” has arrived, Chun said during the speech.

Kim Jin-tae, the nominee for prosecutor-general; Hwang Chan-hyon, the nominee for the Board of Audit and Inspection; Kim Ki-choon, the presidential chief of staff; and Prime Minister Chung are all from counties or cities in South Gyeongsang.