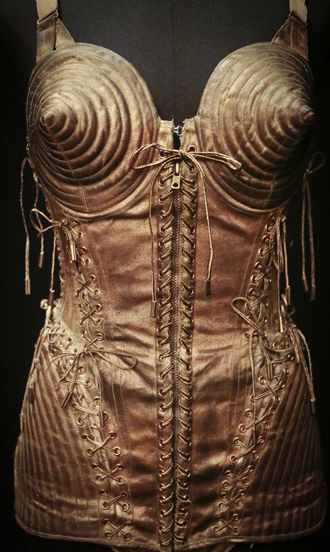 A Jean Paul Gaultier design that was worn by Madonna is previewed during the installation of Brooklyn Museum’s “The Fashion World of Jean Paul Gaultier: From the Sidewalk to the Catwalk” on Oct. 22 in New York. [AP/NEWSIS]

LONDON - The corset and conical bra Madonna wore for her 1990 world tour will go on display at London’s Barbican Center next year as part of an eclectic 2014 season.

The lingerie will be in an exhibition of designs by Jean-Paul Gaultier, who created them for Madonna’s “Blond Ambition” tour as well as stagewear for Kylie Minogue and costumes for the films of Pedro Almodovar and Luc Besson’s “The Fifth Element.”

The Barbican lineup will also include a look at the impact of digital technology on the arts and culture, a play based on a book by Colm Toibin and the venue’s more traditional fare of symphony concerts, recitals and film.

Visitors to the famous brutalist-architecture arts-cum-housing complex in northeast London for the first time topped one million for the 2012-13 season, Barbican managing director Nicholas Kenyon said at a news conference on Tuesday.

He acknowledged it would be hard to beat that, but the varied offerings next year look like a serious bid to do so.

The Gaultier exhibition, which opens in April, will be supplemented by the designer’s personal selection of films he says have influenced him, ranging from Peter Greenaway’s “The Cook, the Thief, His Wife and Her Lover” to Elia Kazan’s adaptation of the Tennessee Williams play “A Streetcar Named Desire.”

In July, the Barbican will open “Digital Revolution: An Immersive Exhibition of Art, Design, Film, Music and Video Games,” which Louise Jeffreys, director of arts, said “will be the most comprehensive cross-arts presentation of digital creativity ever to be staged in the U.K.”

The exhibition will include two purpose-built displays, one of which is an installation of “laser sculptures” by two artists who call themselves Umbrellium.

It also will feature work by Oscar-winning British visual effects artist Paul Franklin, an exploration by musician and Black Eyed Peas frontman Will.i.am of “the interface between analogue and digital music” and the work of video game developers.

Asked who the target audience was, curator Conrad Bodman said: “I think anybody who carries a mobile phone.”

In May, Irish actress Fiona Shaw and British stage director Deborah Warner will give 22 performances of Irish author Toibin’s stage adaptation of his Man Booker Prize-shortlisted novella “The Testament of Mary.”

Despite mostly favorable reviews, it closed last May after only a short run on Broadway.