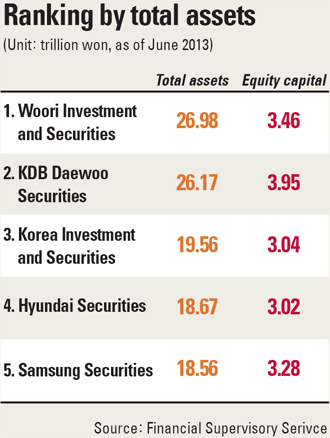 The Financial Services Commission yesterday approved five local brokerage firms with more than 3 trillion won ($2.83 billion) worth of equity capital to carry out their own investment banking businesses, a move that allows them to extend corporate loans and become prime brokers.

The approval comes more than five months after the regulator announced detailed plans to reform the country’s overall capital market by establishing the legal grounds for investment banks in Korea, as in other advanced countries. Following the May announcement, the domestic capital market law was amended in August, and final approval by the FSC was made yesterday.

While Woori is currently up for sale, as part of the government’s plan to privatize Woori Financial Group, sources say that KDB Daewoo Securities could also be made available once the sale of Woori is completed, although no specific time frame has been decided as of yet.

Korea had long been trying to nurture its own large-scale investment banks. However, efforts fell through due to sluggish market conditions and doubts over the risks of and need for a Korean investment bank at a time when international players are still recovering from the global financial crisis of the late 2000s.

In 2008, for example, KDB Financial Group’s then-Chairman Min Euoo-sung attempted to buy Lehman Brothers, carrying out negotiations before the U.S.-based investment bank filed for bankruptcy. Back then, however, Min was strongly criticized, especially by political circles, with lawmakers calling his move “ridiculous.”

Min’s attempt, however, was in line with the previous administration’s efforts to establish a Korean global investment banking company. Also, KDB Financial Group was set up by the former government as the holding company for KDB with the aim of privatizing the bank and eventually becoming a global player in the investment banking business.

According to industry sources, the Park Geun-hye administration’s financial authorities still have that goal of having a Korean investment banking business.

“There may have been some negative sentiment in past years about Korea having its own investment banks,” said an official from the FSC. “But it is in line with the Park administration’s financial policy direction in that they are providing corporate loans and helping to boost the capital market.”