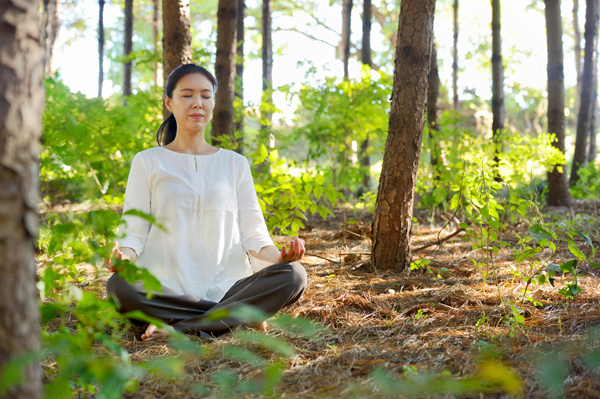 Mediation used to be considered a means of asceticism for religious leaders of Hinduism, Taoism or Buddhism, who would sit with their hands forming an oval by joining the tips of an index finger and a thumb from each hand, and laying them down on their laps.

But as more and more people in this rat-race society suffer mentally, exhausted under great stress, they are looking for ways to heal their minds, and one method that is gaining popularity is meditation. According to data from the Korea Culture and Tourism Institute, 10 percent of the Korean population is estimated to be engaging in mediation, either for religious reasons or simply to ease their minds.

The JoongAng Ilbo’s Health Media has organized a “2013 Meditation Healing Convention - Looking Through My Mind,” which will begin on Nov. 14 at the High1 Hotel in Jeongseon, Gangwon. As the country’s first “healing convention,” the two-day program allows participants to experience different forms of meditation, as well as take a glimpse at various exhibits and receive “meditation counseling” to give restless minds a break. 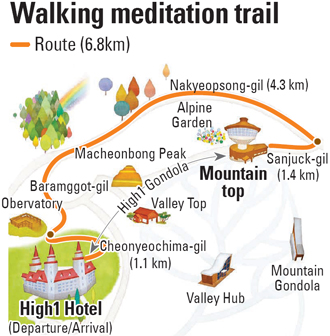 It’s a widely known fact that Steve Jobs, the late co-founder of Apple Inc., practiced Zen meditation, which he believed taught him to “concentrate and ignore distractions” that allowed him to create those sleek, minimalist designs for Apple products. It is said that Jobs learned to “trust intuition and curiosity” through meditation and that he even began offering meditation classes at Apple more than a decade ago. Other companies, including Google, Yahoo and Nike, as well as Samsung and Posco in Korea, followed suit and have been offering meditation classes to their employees.

Jang Hyun-gab, professor emeritus of psychology at Yeungnam University said, “Since the National Institutes of Health’s Center for Complementary and Alternative Medicine began its research on meditation for health-related purposes in 1993, scientific research in this field became very active.”

Jang added that “Engaging in meditation changes your brain structure, affecting your mental health in various ways, such as relieving depression and anxiety, increasing the secretion of serotonin and strengthening immunity, which will prevent you from numerous illnesses.”

However, it’s not easy to find the right place to engage in proper meditation for health-related purposes. Often, people don’t know where to start and where to go for meditation, not to mention “having prejudices that meditation is difficult and expensive, or that it takes a long time to obtain treatment outcomes through meditation.”

According to monk Maga at Dongguk University’s Jeonggak-won, a temple at the Buddhist-affiliated university, “anyone can engage in mediation anywhere, anytime, without any cost.” The monk explained that “meditation is looking through your mind that’s been awakened through your closed eyes and deep inhaling and exhaling.”

During the convention, professional trainers of diverse forms of meditation will be available to answer questions. The main speakers for the convention include Maga, the monk; Ahn Hee-young, the only U.S.-certified mindfulness-based stress reduction trainer in Korea; Shim Sang-sook, professor of Dongguk University who is an expert in tea meditation; and Kim Dae-seon, a professional trainer at Suseonjae, an international meditation school.

Although meditation conventions or exhibitions sometimes focus on somewhat rigid lectures, this one will be full of programs with hands-on experiences. For instance, a trainer will sit in the center of a group while the participants lie down in a shape of a disc and receive meditation training.

On the first day of the event, Kim from Suseonjae will start off the program with breathing meditation. While sitting upright with closed eyes, participants are guided to breathe in and out slowly while bringing their attention to every breath. This allows them to emit the ill energy inside of them when breathing out, such as anger and fury, and receive pure energy when breathing in, according to Kim.

“Through your nose, you breathe in and out using your lower abdomen. By doing this, you are providing sufficient oxygen in your body, which will boost the flow of your blood, energy, and lymph fluid,” said Kim. “This process allows you to feel stability of your mind and soul.”

After stabilizing your mental and physical exhaustion through breathing, the next program allows you to enter into deeper meditation through smelling the fragrance of tea while concentrating on the feeling of the hot fluid trickling down your throat. The tea meditation, led by Shim, teaches participants that “you can drink tea not only with your mouth but also with your mind.”

In the old days, Korean ancestors believed that drinking tea and Zen meditation were one. Concentrating their sense of smell and taste on the tea they’re drinking will allow participants to realize that meditation is “not something that’s difficult to do or strange.”

If you are still having difficulty in concentrating your consciousness in meditation, you can try hypnotic meditation, led by Moon Jeong-ah, who is the head of the Mind Healing Center.

“Meditation is relaxing both your body and mind. All your muscles have to be fully relaxed as well as your consciousness, but this is not as easy as it sounds,” said Moon. “In order to help those who are having difficulty, hypnotic meditation helps them to quickly enter into meditation. It allows you to have deeper meditation than other forms.”

However, hypnotic meditation is different than the hypnosis you often see on television, in which participants get hypnotized upon a click of the fingers with the hypnotic spell of “red sun,” says Moon. “Such scenes are made up to add excitement to the television program. The relaxing procedure of the body and mind takes at least 15 minutes through hypnotic meditation.” Moon said she’ll hold a hypnotic meditation class in a group for the first time during the upcoming convention.

Monk Maga will begin the second day with a mercy meditation program. This method has been especially popular among university students, says monk Maga, as he’s been holding classes at universities across the country, including Chung-Ang University. The students flocked to take monk Maga’s class, which has been referred to as having a “one-second deadline” during the course registration period. Mercy meditation allows participants to realize the positive elements within themselves while letting go of negative feelings and experiences.

“In other words, it’s looking into your mind to see what’s happening right at that moment,” said monk Maga. “For example, if your mind is having anger, you should express it. It’s witnessing your feelings of the moment.”

Meditation has been widely used as a treatment tool for the body and mind. A well-known program is Mindfulness-Based Stress Reduction (MBSR), developed by Jon Kaba-Zinn at the University of Massachusetts Medical Center. The program has been called a “common form of complementary medicine that addresses numerous health problems.”

Ahn, who is the only U.S.-certified MBSR trainer in Korea, will be holding a program on the second day of the event. “MBSR has been acknowledged worldwide through over 33 years of clinical trial,” said Ahn. “Studies on MBSR insist that the method is a form of complementary medicine that can treat a variety of mental problems, such as anxiety and depression, as well as stress-related health problems, including hypertension, cardiovascular disorders and other chronic diseases.”

There’s also a walking meditation on the second day, where participants can take an outdoor walking experience around the venue. The walking trail by the High1 Hotel is popular among trekkers, and the organizers say it’s “a perfect spot to carry out walking meditation.”

Healing booths will be set up during the event for those who have questions on anything related to meditation. Moon and Kim will be offering one-on-one consultations on picking the best kind of meditation for participants. Meditation garments, candles, music and books will be on sale, and monk Maga will have a book-signing session.

According to psychology professor Jang from Yeungnam University, “anyone who is suffering from chronic illnesses and their families, youths who have difficulties controlling their temper due to sudden changes internally and externally, those who are under tremendous stress from work, or the elderly who don’t know what to do with their life” can make good use of meditation. Monk Maga agreed, saying that “meditation is for anyone who is pursuing happiness and those who are facing life difficulties.”

Monk Maga created “mercy meditation,” in which you can change yourself with an affirmative mentality. You look into your mind to realize what goes inside there - to discover your positive elements while releasing negative feelings. By developing inner peace while breaking away from greed and obsession, Maga insists you can free yourself from distress and chaos.

Moon Jeong-ah specializes in hypnotic meditation and color therapy. She has combined hypnosis with meditation to help meditators enter into relaxation. Moon has published a book, “Color, Colorful Life - My Therapy to Happiness.”

Ahn Hee-young is the only official trainer in Korea who has received a teacher certificate through a MBSR program in the United States.

Professor Kang Do-hyung has been conducting scientific research on meditation’s effects on the brain.

Kim Dae-seon is a trainer at Suseonjae, an international meditation school. His research focus has been in breathing and meditation. He trains meditators to take deep breaths so that they can emit ill-energy from their body while allowing pure energy to penetrate inside.