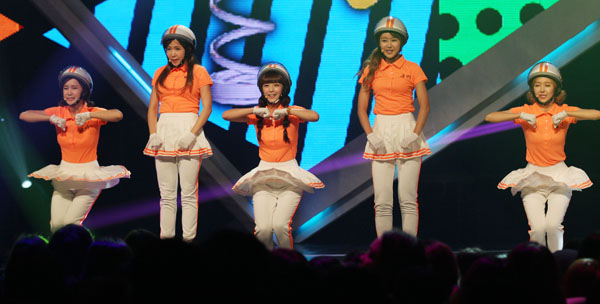 Crayon Pop will start off its international promotions by visiting Australia.

The group, whose catchy song “Bar Bar Bar,” along with its goofy music video, went viral online in the summer, left the country yesterday for a weeklong promotion Down Under.

The group will have many guerilla performances at popular gathering places around the country to get as much exposure as possible. They are also scheduled to have interviews with local media.

“This trip is co-produced by Sony Music Entertainment to let more people overseas know about the group through guerilla concerts out on the street,” said an official at the group’s agency, Chrome Entertainment. “As long as our schedules allow us, we will continue organizing street performances in countries overseas.”

The tactics are basically the same the group used when it was promoting its first album, “Dancing Queen,” in October last year. To build a following, they traveled to several parts of Seoul, including Hongdae in northwestern Seoul, Gangnam Station in southern Seoul and Dongdaemun in central Seoul.