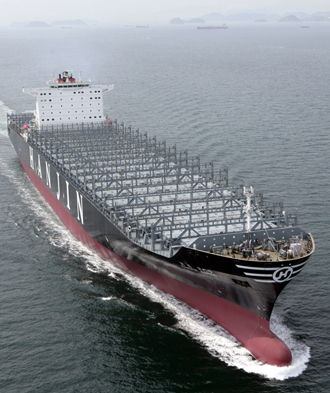 Cho Joong-hoon, founder of Hanjin Group, the country’s ninth-largest conglomerate, was a sailor. At the age of 20, he worked as an apprentice engineer at a Japanese merchant company, which allowed him to see other regions like Southeast Asia on an ocean freighter. That was considered quite rare for a Korean in the 1940s.

The city that impressed Cho the most was flourishing Shanghai.

In a contribution to a newspaper in early 1990s, he wrote, “After looking around Shanghai, I was able to realize that a person with a pioneering spirit can challenge the world.”

Cho was apparently moved by the Shanghai scene, and in 1977 he established Hanjin Shipping Company. Having loved the sea, he had a special affection for the shipping company that he founded, and throughout decades the company repaid Cho by becoming Korea’s largest shipper.

After the founder’s death, his third son, Cho Soo-ho, inherited the company. After his death, his wife, Choi Eun-young, became chairwoman.

The company that faced no big crises through several changeovers in top management now finds itself in a critical situation.

On Oct. 30, Korean Air, the country’s largest carrier and flagship of Hanjin Group, said it would provide 150 billion won ($143.3 million) in emergency funds to Hanjin Shipping Company, which will offer the 15.36 percent stake Choi holds in the company as collateral.

Korean Air and Hanjin Shipping are both affiliates of Hanjin Group, led by Chairman Cho Yang-ho.

Industry sources note the biggest reason for the shipping company’s troubles was the 2008 global financial crisis.

The shipping industry, they say, is extremely sensitive to changes in the global economy compared to other sectors. Economic recession means a drop in cargo demand and freight revenue.

The impact of the 2008 crisis triggered by the Lehman Brothers’ bankruptcy is even bigger for the shipping industry, as there is no clear sign of sustained economic recovery around the world.

STX Pan Ocean, the country’s third-largest shipping company, and the fourth-largest, Korea Line Corp., are both under court receivership. Hanjin Shipping and Hyundai Merchant Marine have also seen deficits for the past three years.

Amid such industry gloom, Hanjin Shipping Company’s total amount of loans in 2010 was 5.58 trillion won, which snowballed to 9.05 trillion won as of June..

Its debt-to-equity ratio also surpassed 770 percent, and because of its bad financial sheet, financial players have turned their backs on Hanjin Shipping when it comes to providing capital.

Until the end of this year, Hanjin Shipping has 250 billion won worth of maturing debt to pay back and 390 billion won next year. And having no other choice to secure funds, the company looked to its affiliate, Korean Air.

Next year, the company plans to receive new loans and issue new stock. It also aims to speed up the issuance of perpetual bonds, which are extremely long-term bonds with no maturity date.

Since the second half of last year, Hanjin Shipping has been trying to issue $400 million worth of perpetual bonds, but the plan has been delayed because the financial sector has been reluctant to accept surety responsibility.

However, with the Korean Air assistance, the institutions are expected to become more favorable to the shipping company. Industry insiders note that Hanjin Shipping will be able to issue perpetual bonds soon.

Meanwhile, Hanjin and other shipping companies are also asking the government for support.

“It looks like one of the government’s measures to boost the shipping industry by establishing a fund that guarantees loans for shipping companies will be realized only next year,” said an industry official.

The official noted that although shipping companies have an option to apply for a state program in which the company issues private placement bonds worth 80 percent of the maturing debt they need to repay, with the Korea Development Bank immediately buying that much in bonds from the company to secure them capital, there are concerns that deciding to go with the program would carry a stigma of insolvency in the market.

“Companies are in need of more immediate and practical support from the government,” the official said.