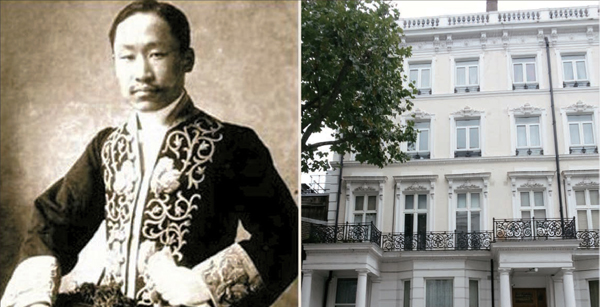 On May 12, 1905, Yi Han-eung, left, an acting diplomatic minister in the United Kingdom, took his own life in protest of Japan’s takeover of Korean sovereignty in a building now named “Sunnyhill Court.” The four-story building, right, is located in London’s Earl’s Court. By Lee Sang-eon

LONDON - In London’s Earl’s Court on 4 Trebovir Road, there is a four-story building, painted all in white, named “Sunnyhill Court.”

It is the building where a former 31-year-old diplomat from the ill-fated last days of the Joseon Dynasty (1392?1910) took his own life in 1905, despairing over his country succumbing to Japan’s rising imperialism.

On May 12, 1905, Yi Han-eung, a diplomat stationed in London, committed suicide, leaving a suicide note lamenting the failing status of his country, halfway across the globe,

“With my people’s rights being taken away, along with the sovereignty of my country, any negotiation [I hold as a diplomat] brings me deep disgrace. If anyone has a sense of justice, how can he withstand this and live through a day?” Yi wrote. “Ending everything here will be better than living with humiliation.”

The Times, a daily newspaper in the United Kingdom, covered Yi’s death a day after his suicide, reporting he had been “greatly depressed” and “had no sort of communication with his Government, and was left without resources from them.”

A graduate of the Royal English School, the first government-run Western-style school, launched in 1886 with a focus on learning English, Yi came to the United Kingdom in 1901 and became the acting diplomatic minister just three years later.

The Korea-Japan Treaty of 1904, which effectively stripped the Korean Empire of its diplomatic rights, further cornered the young diplomat in London and prompted him to take the last act of defiance against Japan’s imperialistic ambition.

Five years after Yi’s final act, the Joseon Dynasty ended its six centuries of history by being annexed to Imperial Japan, which ruled Korea as a colony for 36 years until 1945.

In 1962, 57 years after Yi’s death, the Korean government posthumously awarded the late diplomat with the Medal of Merit for National Foundation for his sacrifice to the country.

Despite the historical importance and implication of Yi’s death, which resonates over a fateful chapter of modern Korea history, Yi’s former residence in London has been left ignored by the Korean government.

There are no displays at the four-story building on Trebovir Road to indicate the history the building holds. And since former President Chun Doo Hwan paid a state visit to the United Kingdom in 1986, no South Korean leader has visited the residence.

According to some officials at the Korean Embassy in London, there have been discussions in recent years to purchase the building and turn it into a memorial hall, in remembrance of Yi’s sacrifice. But no conclusive decision was made due to the expense.

“We mulled over buying the building and using it as a memorial hall. But because of a set of problems, including finding the funds for the project, we lost momentum,” said Choo Kyu-ho, the former ambassador to the United Kingdom from 2010 through 2012.

The building, which has been renovated and divided into 36 studio apartments, is now owned by a non-profit organization that provides housing aid for low-income families in London. It is appraised to be worth 15 million pounds ($23.9 million).

President Park Geun-hye will pay a four-day state visit to the United Kingdom starting today at the invitation of Queen Elizabeth II and is scheduled to commemorate the 130th anniversary of Korea-U.K. diplomatic relations.

The history of a young diplomat who chose to end his life out of the humiliation of losing the sovereignty of his country 108 years ago, however, still remains in the shadows.