Musicians of all abilities come together onstage

Musicians of all abilities come together onstage 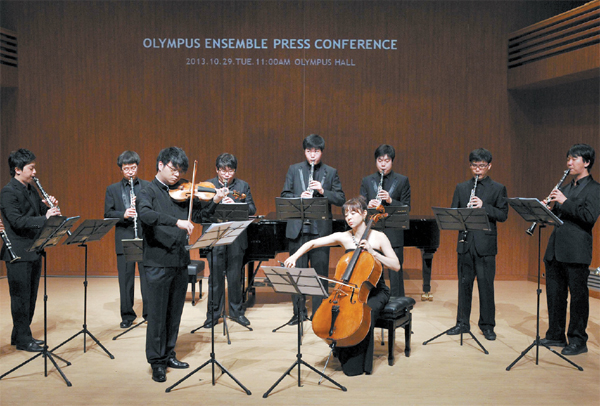 Nine clarinet players dressed in classy black attire came on to the stage to play “Gabriel’s Oboe” from the film “The Mission” with violinist Kwun Hyuk-joo and cellist Park Go-eun last week at Olympus Hall in southern Seoul.

Unlike their professional-looking outfits and seven years of experience, the clarinet ensemble seemed rather disorganized, creating noise as soon as they entered. Some looked confused about where to stand, while others fiddled with the music stands in front of them.

Even during the performance, one of the player’s music stands started to descend, throwing him into confusion as he revealed the panic on his face to the audience.

But rather than feeling irritated by such unprofessionalism, the audience watched the performers with an affectionate gaze as the nine clarinetists are members of the Heart to Heart Orchestra, which consists of youths with developmental disabilities such as autism or intellectual disabilities.

The concert was part of a showcase for the press on Wednesday by the Olympus Ensemble to introduce “Project Concert,” a series of concerts scheduled until April at Olympus Hall that will include Olympus Ensemble members’ solo concerts as well as collaborations with other musicians. The project concert will conclude on April 17 with a collaboration staged with the Heart to Heart Orchestra.

The Olympus Ensemble, which consists of seven professional musicians, including violinists Kwun and Kim Ji-yun, cellist Park, violist Lee Han-na, pianist Park Jin-woo, clarinetist Jang Jong-sun and double bassist Soung Min-je, got together about a year ago in hopes to “popularize classical music to the general public,” while “donating their talents to the society.” The ensemble is supported by Olympus Korea, as part of the company’s corporate cultural responsibility program.

So far, the Olympus Ensemble has been holding their own concerts but also has been performing in the lobby of numerous hospitals across the country, as well as meeting with children with rare and incurable diseases to teach them how to play a musical instrument.

“For those members of the Heart to Heart Orchestra, they have to put unimaginable amount of efforts and practice to play one piece of music and stage a concert,” said pianist Park, adding that there were many audience members who shed tears after watching the ensemble collaborating with the orchestra. “For us, such experiences made us realize that whether you are disabled or not, we can become one through music.”

For the schedule of the “Project Concert,” which kicked off on Oct. 11 at Olympus Hall, visit www.olympushall.co.kr. Tickets for each concert cost 33,000 won ($31).