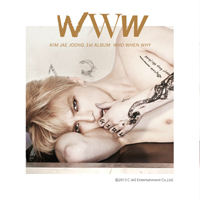 Kim Jae-joong, a former member of the K-pop group TVXQ, has released his first solo album, “WWW,” which stands for who, when and why - words that come and go with love. Kim composed and wrote songs and lyrics for the album.

The 13 songs are rock-based, but the rhythm of British-pop and poetic melody goes amazingly well with strong beats of hard rock and punk. A unique Japanese music style runs through the whole album, which is consistent in style but is not boring.

The lead single, “Just Another Girl” flatters Kim’s shouting tone. It’s about one guy trying to appear cool by calling his ex “just another girl” after a breakup, with the rage expressed through a thick electric guitar sound - which is reminiscent of Avril Lavigne. While “Just Another Girl” sings of a horrible ending, “Let the Rhythm Flow” and “Modem Beat” sing of irritable love. Fans of JYJ will find Kim’s tone attractive, but winning fans’ hearts might be hard. Members of TVXQ and JYJ seem to be struggling to regain the fame they once enjoyed. Hopefully their grandeur will return. By Baek Hee-youn, contributing writer