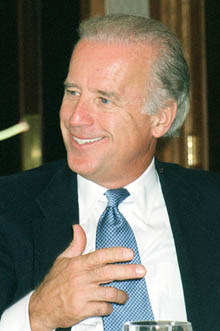 U.S. Vice President Joe Biden will visit Seoul early next month, the first American vice president to do so in a decade, as a part of a three-leg East Asia tour, another demonstration of Washington’s pivot to the region.

The White House said Monday that Biden will embark on an Asia tour of Japan, China and Korea in the first week of December.

Biden’s visit comes at a time of many delicate bilateral and regional issues such as resuming stalled six-party talks to end North Korea’s nuclear weapons program, Korea’s request for a delay in the transfer of wartime operational control of forces, and the renewal of an expiring civilian nuclear energy pact.

In Tokyo, Biden is expected to focus on the broadening of the multinational Trans-Pacific Economic Partnership (TPP) trade pact, which Korea is currently deliberating, and in Beijing issues include economic relations as well as the North Korean nuclear problem.

His trip also comes at a time when Beijing and Seoul have tense ties with Tokyo because of continuing friction over historical and territorial issues.

The last U.S. vice president to visit Korea was Dick Cheney in April 2004.

President Park made a Washington visit in May, where she held her first overseas summit after her inauguration with President Barack Obama and gave a speech in English to both houses of the U.S. Congress, presided over by Biden.

At a forum of U.S. and Korean ambassadors on Oct. 18 in Seoul, Biden said in a video message that he wished to visit Korea soon. “The relation between our nations is more than mutual interests,” he said, “it’s about shared values and deep respect for one another.”