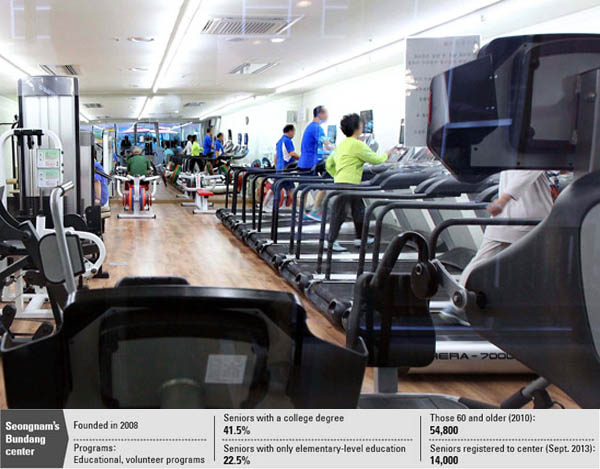 Senior welfare centers provide educational and cultural curriculums based on the characteristics of the region, which are largely influenced by the economic conditions of senior residents. Seniors walk on treadmills at a gym run by the Bundang Senior Welfare Center in Seongnam. By Oh Jong-taek

Late last month at a senior welfare center in the heart of Gangnam District, southern Seoul, a group of about 80 seniors were gathered together singing the pop tune “Green Fields,” among other popular hits.

And just one floor above, a second group was enjoying a Shakespeare play on television. The center, Gangnam Senior Plaza, founded in 2011, is known for offering a variety of culture-based programs to the elderly. This, in part, reflects the high education levels among seniors in the district.

According to a 2010 study by the Gangnam District Office, nearly half - 47.7 percent - of residents aged 60 years or older in the city’s most affluent area have university degrees. But take a trip across town to another senior welfare center, and the situation couldn’t be any more different.

Jungnang District’s senior center in central Seoul offers a basic education class on the Korean alphabet. The course’s popularity more than likely stems from the fact that only 9.6 percent of seniors in the district went to college. And about 44.5 percent of people 60 or older here never made it beyond elementary school. 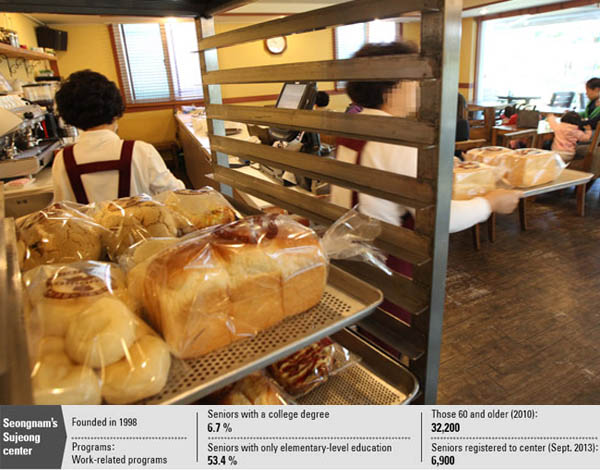 The elderly work at a bakery run by a welfare center in Sujeong District, Seongnam. By Oh Jong-taek

Many of the center’s elderly receive government subsidies, and more than 200 of them come daily for the free lunch program. These two welfare centers, like most in the country, provide educational and cultural curriculums based on the characteristics of the region, which are largely influenced by the economic conditions of senior residents. Many experts worry that such stark divides in welfare programs for seniors could lead to a widening gap in the quality of such programs. And as more seniors retire, the issue of quality is also compounded by the issue of quantity.

According to Statistics Korea, the number of seniors nationwide is projected to increase by 240,000 every year. With 281 senior welfare centers across the country, that’s roughly one center for every 27,100 seniors.

“Just looking at Seoul alone, there is a wide gap in senior welfare programs according to region,” said Lee Sang-chul, a researcher at the Seoul Welfare Foundation.

Lee added that it was critical for the government not only to increase the number of senior welfare centers, but to also “address the widening gap in the quality of welfare programs.”

Lee said because the Baby Boomer generation - those born between 1955 and 1963 - tends to have a collectively high level of education, the government should work to diversify the range of senior welfare programs at senior centers to meet the growing need. Another problem facing senior welfare centers is the disproportionate number of centers across the country. In Seoul, there are 41 senior centers, and every district here runs at least one center.

In stark contrast, Gangwon Province, which has seven cities and 11 counties, runs a mere nine community centers, while North Gyeongsang Province, with 10 cities and 13 counties, only has 13 centers.

Problems largely began in 2005, when the central government halted funding for local governments to build senior welfare centers. As a result, local governments with a low fiscal self-reliance ratio have been hesitant to build centers, which would cost them at least 10 billion won ($9.42 million) each.