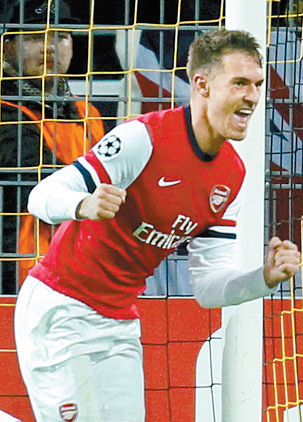 Arsenal’s Aaron Ramsey celebrates after scoring a goal against Borussia Dortmund during their Champions League Group F match in Dortmund on Wednesday. [REUTERS/NEWS1]

Arsenal, who avenged a 2-1 loss to Dortmund in London last month, bided their time for more than an hour in pouring rain, soaking up Dortmund attacks before striking with their first effort on goal.

The visitors scored against the run of play, with Ramsey sneaking into the box to head home in the 62nd minute. The result lifts Arsenal to nine points in four games, ahead on goal difference of Napoli, who beat Olympique de Marseille, 3-2. Dortmund dropped to third with six points.

“We were mature in our tactics, we made no major mistakes and had patience,” Arsenal coach Arsene Wenger said.

“We had problems creating chances, and we had a brief difficult period early in the second half, but then we scored and were not so much under pressure.”

The hosts, who until Wednesday had never lost at home to English opposition in seven contests, wasted half a dozen clear chances but failed to make their dominance count.

Both teams brought a solid track record to the game with Arsenal unbeaten for 14 games away from home and Dortmund having won eight out of eight at home this season, including the German Super Cup.

“I told my team what everyone saw today, that we got nothing for our effort. Losing was not in our plans,” said Dortmund coach Jurgen Klopp, back on the bench after a two-game suspension.

The hosts took the initiative from the start but found little space to launch their trademark quick breaks.

The two sides canceled each other out early on with a tactical waiting game in midfield.

It was fittingly a defender - Neven Subotic - who carved out Dortmund’s first chance after 17 minutes, drilling his shot from a Sven Bender header just wide.

Jakub Blaszczykowski’s volley sailed over the bar a little later and Henrikh Mkhitaryan’s curling left-footed drive whizzed wide as the Germans upped the tempo a notch midway through the first half.

Arsenal worked hard to stifle German attacks but was toothless in attack with keeper Wojciech Szczesny called into action straight after the break, first saving a Marco Reus header and then denying Blaszczykowski once more.

The visitors struck with their first effort on goal when Olivier Giroud headed on a Mesut Ozil cross and Ramsey beat Subotic to the punch and nodded in from close range. Reuters