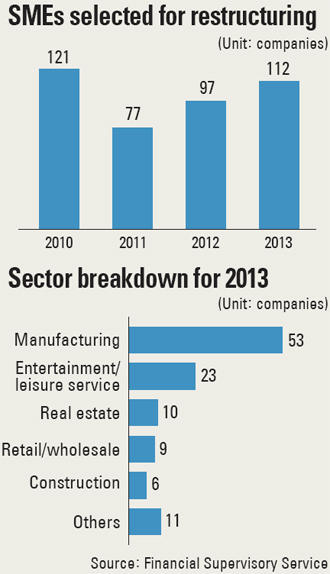 While financial institutions enhance their risk-management operations, more than 100 small and midsize enterprises were selected by creditor banks as targets for restructuring this year, the Financial Supervisory Service said yesterday. Some of the selected SMEs will be given the opportunity to tackle their financial sheets with creditors as part of a workout program, while others will have to try on their own to normalize their businesses or ask the court for help.

According to the financial regulator yesterday, creditor banks from July through October conducted regular credit evaluations of their 16,004 corporate debtors in the SME sector. The companies that received evaluations were those whose total loans are less than 50 billion won ($47 million) and those that have received 5 billion won or more in loans from a single financial institution. In July, creditor banks selected 1,502 SMEs as having a poor financial structure and conducted a more thorough credit evaluation for three months from August. Creditor banks gave C and D grades to 112 SMEs and identified them as targets for restructuring. Compared to last year, 15 more SMEs were added to the list.

The FSS, however, did not disclose the names of the companies.

“It looks like this year creditor banks were more than eager to carry out aggressive restructuring to boost risk-management operations at a time when the economy is in the doldrums,” said Cho Young-je, senior deputy governor at the FSS. Local financial institutions have been engulfed in growing concerns over the soundness of their assets. An FSS report on Thursday showed that the total amount of bad debt at local banks reached 25.8 trillion won in the third quarter, 900 billion won more than the previous quarter.

FSS data showed that the total amount of loans held by the 112 targeted companies as of September was 1.5 trillion won, about 1.08 trillion won of which has been extended by commercial banks, 64.9 billion won by savings banks and 55.5 billion won by insurance firms. Restructuring of the companies would require financial institutions to set aside 573.5 billion won as reserves to cover bad debt, the regulator said.

By sector, almost half - 53 of the 112 companies - are engaged in manufacturing. In particular, the number of companies involved in managing golf clubs and entertainment and leisure services rose, as they tend to be more sensitive to changes in the economic climate.

SMEs that received a C grade will be under a workout program pushed by their main creditors to help them normalize their businesses, while those with a D grade will have to try on their own to put their businesses in order, and if not file for a court receivership program.

“If creditors fail to reach an agreement [when it comes to workout programs], then the financial regulator will be active and play its role to put things straight,” said Cho. “We will advise creditor banks to provide swift financial support to those companies that are able to normalize their businesses through a strict judging process and help them escape a temporary liquidity shortage.”

Yesterday’s announcement came a few days after the Financial Services Commission said on Tuesday that more large companies with debt will be under close watch by the regulator next year to help prevent insolvency. About 45 highly indebted companies are estimated to be included on the prime debtors list in 2014 and will receive input from their own creditors to help reduce their debts.