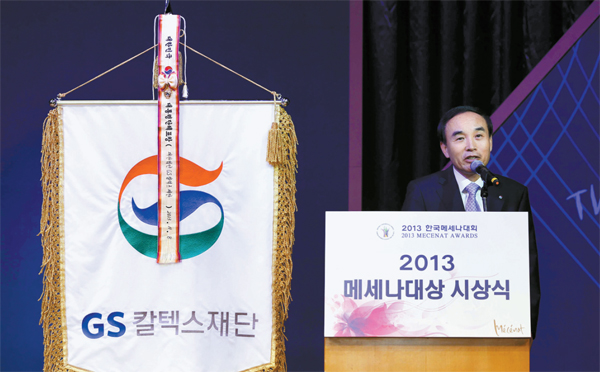 Kim Myung-hwan, vice president of GS Caltex, speaks yesterday after receiving the grand award at the 14th Mecenat Award ceremony at the Korea Chamber of Commerce and Industry in central Seoul. Provided by the association

In the middle of a 700,000-square-meter (173-acre) meadow sits an enormous concert hall near the beach in Yeosu, South Jeolla. The Yeulmaru cultural complex was erected by GS Caltrex, the nation’s second-largest oil refinery, which also manages the facility.

According to the company, 110 billion won ($103.3 million) was invested in the cultural complex that was opened to the public last year.

The purpose of the facility was to provide cultural benefits to the local community through art exhibitions and performances.

Instead, it has become a distinctive landmark in the region as the first facility owned and operated by a conglomerate to offer group therapy for children with psychological problems.

In contrast to other conglomerates that often limit their corporate social responsibility initiatives to sponsored events or financial support, GS Caltex has taken a far more aggressive approach by teaming up with professionals that help troubled children through art, music and dance.

Yeulmaru is just one of the many social programs in which GS Caltex has been involved. In recognition of those contributions, the company yesterday was named recipient of the Mecenat Award presented by the Korea Chamber of Commerce and Industry.

It also received the grand award for supporting greater access to arts and cultural events, as well as a presidential citation.

Kumho Terminal got the Cultural Management Award for transforming Gwangju bus terminal into a cultural complex that features an art gallery and performance hall.

Sempio Foods, producer of traditional Korean pastes and soy sauce, received the Creative Award for opening an art exhibition along with a traditional fermented food research and development center.

One of the judges, Shin Su-jung, former dean of Seoul National University’s music department, said it was noticeable that this year the emphasis was not only on contributions made to the region’s cultural development, but more on the efforts made to benefit the community.

“We hope to see development in art and culture boost our neighbors’ happiness and further contribute to the nation’s economic growth,” said Park Yong-hyeon, president of the Korea Mecenat Association and Doosan Yonkang Foundation.

The group’s name is taken from ancient Roman minister famous for his support of artists and cultural figures.

This year’s ceremony recognized five conglomerates and one individual member under the theme of cultural development.