Unaids chief got early start on helping others

Unaids chief got early start on helping others 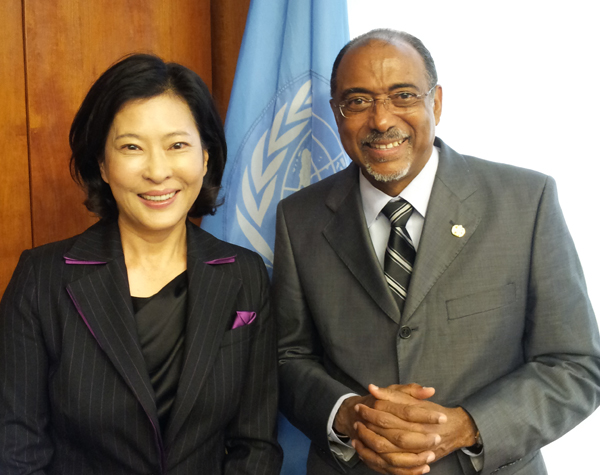 Han Young-sil, left, a special advisor to Unaids and a former president of Sookmyung Women’s University, accompanied Michel Sidibe, the executive director of Unaids, during his visit to Korea. By Chun Su-jin

Michel Sidibe, the executive director of Unaids, the joint United Nations program on HIV/AIDS, decided to devote his life to helping others at age 12, when he saw a mentally-challenged child bullied by his peers.

Sidibe, who is now 61, believes such incidents happen because many people have hostility against those they deem different. He sees that those diagnosed with AIDS suffer the same prejudice as the bullied child.

“My personal belief is that if we don’t have a society that is inclusive, we’ll always fail. No peace, no social transformation, no economic growth,” said Sidibe. “Inclusiveness brings them all together.”

Sidibe, who is from Mali, was appointed by the United Nations Secretary-General Ban Ki-moon in 2008 and assumed the post in 2009.

But he began his UN career much earlier, when he was recruited by Unicef to work in the Democratic Republic of Congo in 1987.

After a series of leadership roles at Unicef, Sidibe joined Unaids in 2001 as the director of the Country and Regional Support Department, where he oversaw a comprehensive reform effort and is now credited with helping the division become more effective at delivering country-level results.

Although much progress has been made at different levels during his term, he still emphasizes that those with AIDS suffer discrimination and even persecution.

“Gays are so vulnerable and often fall victims to the epidemic because of the stigma against their sexual orientation,” Sidibe said. “They are victims for who they love? That’s unacceptable.”

He said that many African countries’ persecution of gay couples hampers his group’s efforts to effectively combat the infection because the oppression often causes embarrassment, which makes them keep a low profile rather than seek help for the infection.

Sidibe cited the example of a Malawian gay couple who had been sentenced to 14 years in prison for their sexual orientation. But Malawi’s president, Bingu wa Mutharika, eventually pardoned them and ordered their release after meeting Ban. However, the president insisted that homosexuality was still illegal in his conservative southern African nation.

Sidibe noted that a daunting task is ahead in fighting HIV/AIDS in children.

“Unaids’ efforts are focused on 30 countries that account for 90 percent of new infections among children. I think that the effort today will allow us to achieve our objective of zero new infections in children by 2015,” he said.

But the top priority still goes to people who suffer from and are fighting the infection.

“We will continue to make progress in helping 10 million people in treatment. And there are 18 million waiting for treatment. Those are people who will die in six months, if they can’t get treatment,” he said.

“It’s not acceptable to let these people die in a silent way because they are poor and not educated.”

During his visit to Korea, he was accompanied by Han Young-sil, a special advisor to Unaids and a former president of Sookmyung Women’s University.?