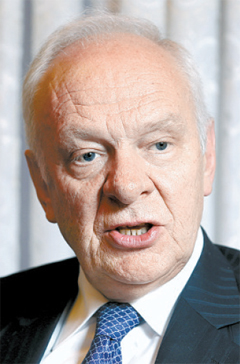 President Park Geun-hye and Russian President Vladimir Putin are slated to come up with a road map outlining bilateral relations for the next five years in an upcoming summit next week, according to Russia’s top envoy to Seoul. That includes introducing a visa-free travel policy between the two nations.

“There is closeness” in the two leaders’ views, especially when it comes to Park’s plan for cooperation between Asia and Europe and the president’s vision of trust-building on the Korean Peninsula, said Konstantin Vnukov, the Russian ambassador to Korea.

Vnukov, 62, sat down for an interview Wednesday with the Korea JoongAng Daily and the JoongAng Ilbo at the Russian Embassy in central Seoul, ahead of Putin’s state visit next Wednesday.

He emphasized the importance of the travel agreement the two leaders will sign - which would allow citizens from both countries to travel without a visa for up to 60 days.

The policy will take effect in January, making Korea the first country in the Asia-Pacific region to have such an agreement with Moscow.

“It was my personal idea when I came here four years ago,” said Vnukov, “because visa procedures require quite a lot of time, and - to be frank - it’s pretty expensive.”

The visa-free agreement, he added, “reflects the importance of our relations .?.?. and the sophisticated and well-established mutual trust that is important for creating strategic relations.”

Putin and Park “established a very good personal relationship” in an earlier bilateral meeting in St. Petersburg, Russia, along the sidelines of the Group of 20 Summit in September, he said, where they agreed to a full-scale summit in Seoul.

“The point of this summit [next week] and the joint statement is to solidify a comprehensive plan for the development of strategically important political, cultural and economic [projects],” he said.

Vnukov added that Putin is supportive of Park’s Silk Road Express plan, part of her “Eurasia Initiative,” which would establish a network of roads and railways running from Busan through South and North Korea, Russia and China, and onto Europe.

“This was actually an idea put forward by [Russia] in 1990s .?.?. This project was among at least three projects with [North and South Korea] and the Russian Federation,” he said.

“We have excellent conditions in place for the accomplishment of this project,” Vnukov continued. “Last month we finished the reconstruction and modernization of the railroad line between Rajin, in North Korea, and Khasan [a Russian settlement near the border].”

The third-term Russian president, who was first elected in 2000, is known to be keen on promoting development in his country’s far east to improve the area’s economic infrastructure.

“The general idea was to take into account the export-oriented character of your economy to open a route for goods - and especially containers for these goods,” Vnukov said.

He added that Russia has “huge plans for the modernization of the Trans-Siberian railroad.”

“President Park, she understands this very well, and she started discussions with Putin in St. Petersburg with exactly this idea .?.?. I think this will be one of the central topics of discussion for our leaders [next week].”

The six-party talks - a series of meetings with the United States, Russia, Japan, China and the Koreas - began in 2003 and were originally aimed at ending North Korea’s nuclear program.

The meetings stalled in December 2008, and North Korea walked out of the talks in April 2009 in protest of international condemnation of its long-range missile tests.

However, the ambassador admitted that he was optimistic about recent discussions among relevant parties. “It means that people - diplomats from [South Korea and Russia] - are still convinced that the process of negotiations should be restarted.”

Seoul and Moscow established official bilateral ties in 1990, but relations date back to at least 1864, according to Vnukov. Over the 23 years of official ties, leaders of the two nations have met 26 times.