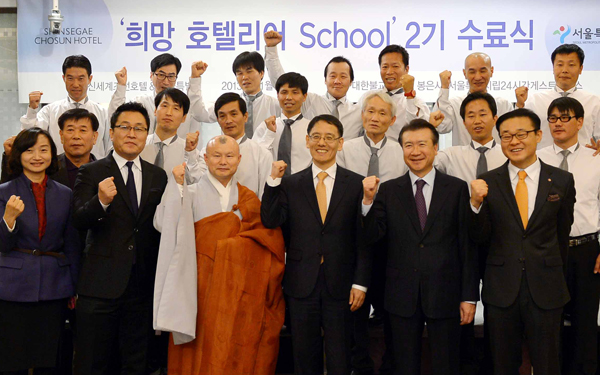 The Westin Chosun Hotel Seoul celebrated the conclusion of its 10-day homeless-support program yesterday at the hotel in central Seoul. The attendees include Kim Sang-bum (first row, third from right), deputy mayor of Seoul City, and Sung Young-mok, president and executive of the hotel. [NEWSIS]

The Westin Chosun Seoul held a ceremony yesterday to mark the conclusion of its 10-day homeless-support program, in which 17 displaced people received training to become eligible for employment as hoteliers.

The hotel said most of the trainees have succeeded in landing jobs at different hotels across Seoul, while a few have found work in the retail and service sectors with companies.

“Our aim is to give the homeless not only the vocational skills and work experience [they need] but also the confidence and positive outlook necessary to achieve long-term employment,” said Lee Ji-seon, of the hotel’s Corporate Social Responsibility division.

The ceremonial event was attended by a number of prominent figures from religious and charity circles, including Jin Hwa, head monk of Bongeun Temple, Kim Sang-bum, deputy mayor of Seoul and Sung Young-mok, president and executive of the hotel.

The initiative kicked off in May, with the first round of trainees finishing the course in June. Most of them were hired at affiliates of the hotel.

The second round of the program was focused on offering training specific to the hotel industry, and several Westin Chosun staff were invited to share their experiences with trainees.

“We also hired some outside lecturers to cover a broad range of customer service concepts that can be applied to various sectors,” Lee said. “But most of the lecturers came from within our company who wanted to share their experiences and knowledge.”

The hotel arranged accommodations for the candidates and collaborated with local shelters to find candidates. “We had 37 candidates in the first phase, but we narrowed down it to 17 after meeting them and conducting interviews,” Lee said. “We hoped to select people who were willing to improve their lives and adapt to a new environment.”

The hotel plans to expand its program ahead of its 100th anniversary in 2014.