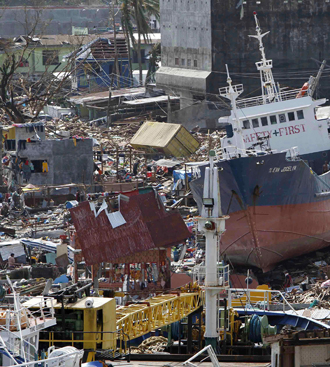 Around 40 Koreans were feared missing in the Philippines following the superstorm that struck Friday, killing thousands and leading to widespread destruction, officials in Seoul said.

But there has been so much damage to infrastructure and communication systems the reports were very tentative.

Typhoon Haiyan, one of the biggest and strongest storms ever recorded, swept through central Philippines on Friday with gusts of 170 miles per hour, shutting down airports, cutting power and destroying countless buildings. In the Philippines, the storm was called Yolanda.

While the part of the central Philippines struck the hardest does not have many Korean residents, an official from the Ministry of Foreign Affairs yesterday said that it has received reports that communication with at least 40 Koreans in the region has been cut off, including a missionary family residing in Tacloban, the capital of the eastern province of Leyte that was flattened by the storm. Samar and Leyte provinces were the hardest hit.

The official said around 20 of the names of the Koreans reported missing checked out in records of residents of the Philippines. But there is no confirmation of their actual conditions. Not all of the Koreans living in that region are registered as residents, adding to difficulty in confirming people’s whereabouts, he said.

Shin Dong-ik, deputy minister for multilateral and global affairs, convened an emergency meeting for relief aid at the Foreign Ministry yesterday. “We were officially told that 1,200 are dead but reports from the ground indicate more than 10,000 casualties.”

The Philippine Red Cross has estimated 1,200 people were killed by the typhoon, but much larger estimates have been made.

“Responding to the large number of victims, the U.S., U.K. and United Nations is preparing larger aid than initially expected,” said Shin, “And the Korean government also plans to provide as much support as possible.”

The storm displaced some 620,000 people, according the UN Office for the Coordination of Humanitarian Affairs.

The Philippines government and international relief agencies including the UN World Food Program and World Vision are working to get emergency supplies into the worst-hit areas.

The Korean government yesterday expressed its condolences for the deaths and damages and said it plans on providing humanitarian aid to support recovery efforts.

The Foreign Ministry in the meantime said it will immediately dispatch an emergency response team of five, comprised of two officials from the National Emergency Management Agency, two relief workers from Korea International Cooperation Agency (KOICA) and one doctor from the National Medical Center.

The group was scheduled to depart to Cebu last night to try locating the missing Koreans and see the situation there, joining embassy and consulate officials already on site. Because of the chaos in Tacloban, Cebu is the closest point they could land.

Typhoon Haiyan yesterday landed in Vietnam as a tropical storm with a wind speed of 85 miles per hour.