Brits are good at pomp and contempt

Brits are good at pomp and contempt 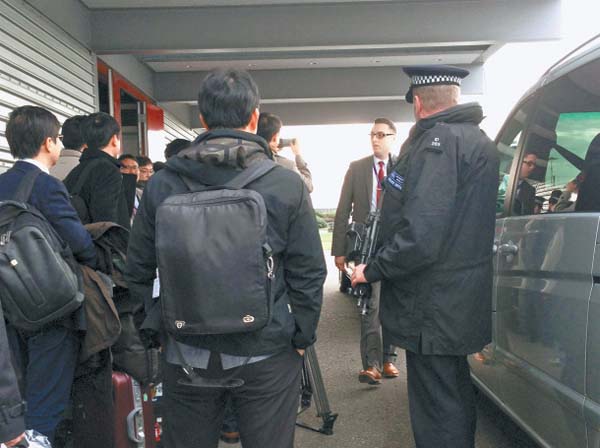 Blue House correspondents were corralled by heavily armed policemen outside a building at London’s Heathrow Airport before departing for Brussels on Air Force One with President Park Geun-hye on Thursday. By Seo Ji-eun

Among the three European countries President Park Geun-hye visited last week - France, Britain and Belgium - Britain was the only country that invited her as a state guest. Only a few foreign leaders are invited as state guests, and they received the best possible treatment from Queen Elizabeth II.

But the splendid welcome afforded to the president was denied to some 70 members of the press accompanying her, including full time Blue House correspondents. Veterans of presidential trips said they had never been treated with such condescending rudeness. It reminded some of the memorable remark made by U.S. Ambassador to the United Nations Andrew Young in 1977 that racism must have been invented in Britain.

The rudeness began from the very start at the Horse Guards Parade in which the Queen greeted President Park on Nov. 5, the second day of Park’s stay in London. Park was supposed to receive a 41-gun salute and then ride to Buckingham Palace in the Australian State Coach with the Queen and Prince Philip.

When a dozen Korean journalists arrived at the gate, security guards stopped us with no explanation. Time ticked away, and we knew the event was about to start - without us in position to cover it.

Just minutes before its start, we were allowed into the venue. But no one on the British side knew where to put us. Photographers demanded to know where they could start shooting.

The British minders told us in no uncertain terms to stay where we were. And they said everything would have gone a lot smoother if we hadn’t all been late!

The situation deteriorated after Park, the Queen and Prince Philip pulled away in the coach. Now the British minders wouldn’t let us leave. They lectured us that it was “rude” to leave before the departure of the honorable Mayor of London and a few other government officials on the stage. We looked up. They were happily chatting to each other on the stage and in no rush to depart. We had no choice but to stand helplessly.

Journalism is all about timing. Many of us had deadlines approaching back in Seoul. Our editors in Korea needed photos, videos and articles about the pomp and ceremony going on in London. What is the use of being on the scene when you can’t report it?

The British haughtiness culminated at Heathrow Airport on Thursday. When the Korean press arrived to leave with President Park on Air Force One for Brussels, the last destination of her eight-day trip, British police told us to remove everything containing liquid from our luggage. Normally, Blue House correspondents accompanying the president on her plane are exempted from the harsh security applied to ordinary tourists. Our baggage is strictly screened by the Korean government. What kind of a government treats screened members of the press traveling with the president as potential terrorists?

Police and airport officials kept ordering us, with our luggage, laptops and carry-on bags in tow, to keep shifting our positions. We’d move into a new position and be ordered to move again. Holding gigantic guns with an immensely menacing attitude, they screamed, “Move! Move!”

When asked why we had to move yet again, a female police officer replied in a scornful voice, “You should move unless you want to be hit by the car.” After the president’s car passed, they drove a line of vehicles on our right side to force us to line up.

The press kept complaining, but whenever someone directly questioned an officer, he would hoist his gun while replying, which everyone found unnecessarily intimidating. An official from the Korean embassy in London kept saying to us, “What can we do about this?” while a Korean official protested in a loud voice but was ignored. She later burst into tears.

The press were not the only ones run roughshod. Park’s presidential guards had to take off their belts and shoes, which has occurred nowhere else in the world. Reporters who had traveled with the president tens of times said the treatment was unprecedented, even in countries with notoriously strict security like the U.S. and Russia. We later learned that this was the first departure in which the president had to wait for the press to get on board her plane. Usually it’s the other way around.

And thanks to the oppressive security, the president’s departure from London was late, as was her arrival at her first destination in Brussels.

Blue House officials said British security authorities notified them of the heightened checks the day before our departure. People dispatched from Buckingham Palace tried to persuade the police into simplifying their security at the airport but were ignored.

Lee Jung-hyun, senior presidential secretary for public affairs, kept apologizing. Later, he said security at Heathrow was “notorious” and maybe we shouldn’t complain because it was “an attempt to take care of Korea’s safety.”

The problem was not the security. What mattered was the British authority’s attitude and whether it originates from a habit of looking down on other countries or its conventional protocol for dealing with foreign delegations.

If a country goes to great lengths to extend courtesy and hospitality to a state guest, a leader of a nation, to show how fond they are of her, what does it say when it treats the people accompanying her as if they are beneath contempt?

In both the Korean and English dictionaries, the answer is hypocrisy.