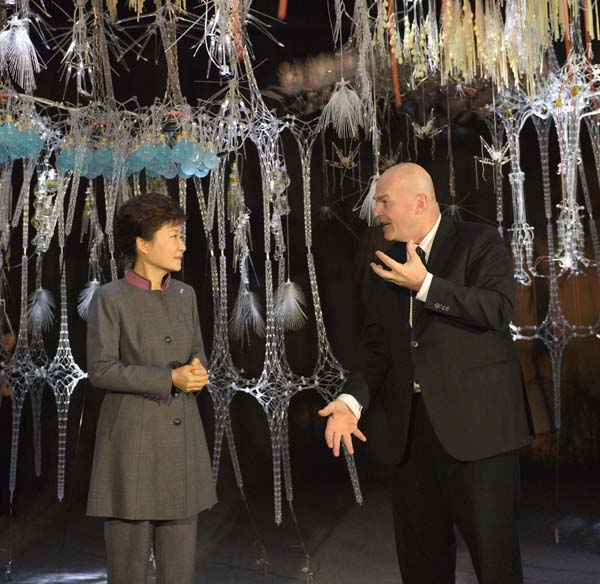 President Park Geun-hye talks with Canada-based architect Philip Beesley about his artwork “Epiphyte Chamber” at the opening of the National Museum of Modern and Contemporary Art’s new Seoul branch, or MMCA Seoul, yesterday afternoon. The museum, located east of Gyeongbok Palace in the heart of Seoul, opens to the public today after a four-year construction project.

Park said in a speech at the opening that she hopes the museum, set up in a historical site, will be a landmark of art and culture, along with its neighboring art galleries in Insa-dong, Bukchon and Samcheong-dong. Previously on the site were government office buildings from the Joseon period (1392-1910) and the Defense Security Command headquarters from the mid-20th century.

“In official tours in foreign countries, I have included programs to promote Korean culture there while visiting the countries’ museums and galleries, despite tight schedules, because it is cultural prosperity that improves a country’s status and its people’s quality of life,” she continued. “The government is making efforts to expand cultural funding, despite the government budget being in a difficult condition, to achieve cultural prosperity.” . [NEWSIS]