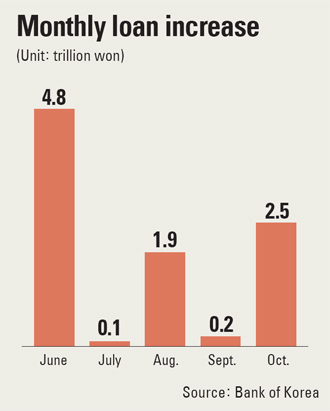 According to the Bank of Korea yesterday, household loans from banks in October amounted to 474.4 trillion won ($442 billion), 2.5 trillion won more than the previous month.

The additional amount of loans taken out was the largest since June, when they increased 4.8 trillion won month-on-month. Borrowers rushed to financial institutions in June with government real estate benefits, including a cut in the acquisition tax, set to expire at the end of the month.

The new stimulus package included a permanent reduction of acquisition tax as well as other benefits such as low interest loans.

However, the market remained subdued as opposition from local governments raised doubts about whether the package would be enacted.

It was only after the ruling Saenuri Party recently announced its full support of the lower acquisition tax that the market started to respond.

A survey by the Korea Housing Institute showed a boost in optimism about a housing market recovery.

The housing business sentiment index last month for the greater Seoul area was 115.6. This is up from 96.7 registered in September. The index has been on the rise for two consecutive months. A reading above 100 shows that a majority of the 500 companies in the Korea Housing Association and the Korea Housing Builders Association are optimistic.

However, the problem of household debt is that it is already at a critical point and a further increase will threaten the financial market, especially once the central bank starts tightening its monetary policy.

The central bank will hold its monthly monetary policy committee today. The market is betting the bank will keep the current benchmark rate unchanged at 2.5 percent, as uncertainties remain about when the U.S. Fed might start to taper its quantitative easing.

Previously, the market bet that the bond-buying program would likely remain until March. However, a positive U.S. jobs report on Friday has raised the possibility that the U.S. Fed could start scaling back its stimulus program as early as next month.

Although corporate loans grew, the amounts that were added last month were smaller than those made the previous month.

Borrowing from small and midsize companies was nearly half compared to the previous month.

In September, loans by small and midsize businesses increased by 4.1 trillion won from the previous month.