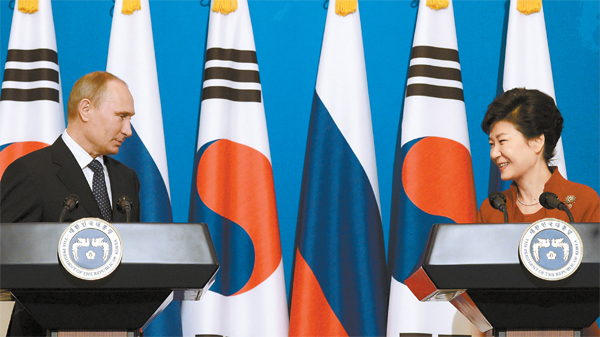 Korean companies will participate in a railway project jointly led by Russia and North Korea, according to a memorandum of understanding signed by President Park Geun-hye and Russian President Vladimir Putin yesterday after a summit.

Putin also urged quick resumption of the six-party talks as a political and diplomatic solution for bringing peace to the Korean Peninsula.

The MOU, among a slew of others signed on the sidelines of Putin’s visit to Seoul, will allow a consortium formed by Posco, Hyundai Merchant Marine and Korail to acquire nearly half of the 70 percent stake that Russia owns in a five-year-old joint venture called RasonKonTrans. North Korea holds 30 percent. The Blue House did not disclose the exact size of the stake Korea will obtain.

The joint venture is supposed to develop the Rajin-Khasan railroad project that dates back to 2000, when Putin agreed with North Korean leader Kim Jong-il to jointly develop a 54-kilometer (33.5-mile) line linking the Russian eastern town of Khasan to the North’s port of Rajin. Russia hoped to facilitate shipping of its freight via Siberia to Europe using the railroad.

The deal will enable the South Korean companies to take part in not only the railroad operation but also the construction of ports in Rajin.

“I welcome the signing of the MOU for future cooperation between companies from both countries and have agreed [with Putin] to encourage smooth proceeding of the project,” said President Park at a joint press conference after the signing.

The budget for the project is $340 million, and the joint venture was set to begin operation of the railroad in 2008 and run for the next year 49 years. Its launch had been stalled for five years, largely due to North Korea’s provocations such as its nuclear and missile tests. Russia finally reopened the track in September after a five-year renovation.

What makes the deal significant is that it may signal South Korea is easing the “May 24 sanctions” on North Korea that were imposed in the wake of North Korea’s sinking of a South Korean warship in 2010. The restrictions ban all trade and investment with the North.

Although Ministry of Unification spokeswoman Park Soo-jin said in a briefing yesterday that the South Korean government’s stance on the May 24 sanctions “remain unchanged,” analysts said the deal has opened up the potential for flexible application of the restrictions, making it possible for South Korean companies to use a roundabout method of investing in North Korea under the names of Russian or Chinese corporations.

The project also coincides with the “Eurasia Initiative,” a vision President Park came up with on Oct. 18 for regional and economic cooperation between Europe and Asia. It has a complex economic and diplomatic agenda that aims to achieve two major tenets of the new administration: economic revitalization and building a foundation for peaceful unification. Putin expressed his sympathy with the initiative during the summit.

“We have agreed to combine Korea’s policy to step up Eurasia cooperation and Russia’s policy to emphasize the Asia-Pacific region, thus realizing each other’s potential to a maximum level and developing our bilateral relationship on a future-oriented basis,” said Park.

In regard to security issues, the two leaders stressed that North Korea should not possess nuclear weapon status under the Treaty on Non-Proliferation of Nuclear Weapons (NPT), while confirming that they would not allow Pyongyang to build its nuclear and missile capacity.

“North Korea should observe the international duties and promises under the United Nations Security Council resolution and denuclearization,” the joint statement said. “We will make efforts to create circumstances for resuming six-party talks with the participating members.”

“Russia supports resumption of six-party talks as soon as possible,” said Putin in a press conference, adding that Russia and South Korea share common goals when it comes to the Korean Peninsula.

Park and Putin also vowed to cooperate on the energy businesses. They agreed to continue talks over Russia sending natural gas from Sakhalin or East Siberia to South Korea via a pipeline.

“Issues surrounding Russia’s long-term supply of natural gas to Korea will take into account various conditions including the pool of resources and economic feasibility,” said the statement.

The pipeline is supposed to start at Vladivostok and go through North Korea before terminating in South Korea, a 2,700-kilometer route. Should the energy deal be realized, Korea could diversify the source of its fuel although the project would require the participation of a stable North Korea.

In the longer term, Korea will ask for Russia’s support in using the North Pole shipping route.

The North Pole route has recently emerged as an alternative to the Suez Canal after the melting of ice. Using the route can shorten shipping times by an average of 10 days compared to the Suez route, according to studies.

The two leaders also agreed on a visa-free travel policy between the two nations - allowing ordinary passport holders to stay 60 days without visas - and designating 2014 and 2015 as special tourism years to boost bilateral tourism.

The summit marked the leaders’ second meeting since Park took office in February. They had a bilateral meeting in September at the Group of 20 conference. The issues talked about yesterday were mostly follow-ups to the discussions two months earlier. The two countries forged diplomatic ties in 1990 and the relations ascended one step further in 2008 when they became strategic partners.

Putin is the first leader among the four major powers with a deep relationship with Korea - the United States, China, Japan and Russia - to visit Korea for a summit with Park. He came to Seoul previously in 2001 and 2005.

He flew into Seoul from Vietnam at 3:30 a.m. yesterday, more than two hours later than the schedule announced by the Blue House Tuesday.

The presidential office, when they first announced on Nov. 2 Putin’s plan to visit Seoul, said he would be spending two days here, from Nov. 12 to 13. The two days were slashed to just one, the Blue House announced Tuesday.

“He was originally scheduled to arrive at 11 p.m. Tuesday from Vietnam and go to sleep right away. It’s a time difference of only two hours,” said a Blue House official Tuesday, adding Putin would be arriving at 1 a.m. yesterday, without offering further explanation for the delay.

Putin appeared at the summit venue 30 minutes later than scheduled, at 1:30 p.m., and the joint press conference was pushed back by over an hour.

Although his visit was supposed to wrap up with a lunch, a formal affair attended by 80 Korean and Russian officials, businessmen and journalists, it ended up as a “lunner,” or a combination lunch and dinner.

“Since diplomacy is based on mutual agreement, the schedule may be flexible,” said another Blue House official philosophically. “We only know the changes came from Russia.”