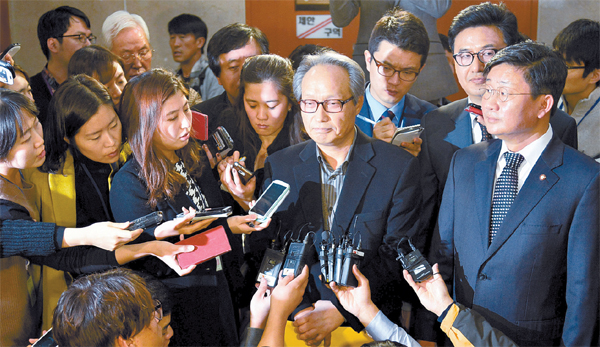 By the order of President Roh Moo-hyun, the Blue House intentionally deleted the original transcript of the 2007 inter-Korean summit, the prosecution said yesterday, wrapping up its investigation into the mysterious vanishing of the record from the National Archives.

The prosecution indicted Baek Jong-chun, former chief presidential secretary for unification, foreign and security policies, and Cho Myoung-gyon, who served as Roh’s security policy secretary, on charges of violating the Act on the Management of Presidential Archives and the penal code governing public electronic records.

Representative Moon Jae-in, former presidential chief of staff, was not indicted. Prosecutors said they found no evidence he was involved in the deletion.

“The 2007 inter-Korean summit transcript was intentionally deleted and destroyed at the order of the president and never stored at the National Archives, thus it could not be kept as a historic document,” Lee Jin-han, a senior prosecutor of the Seoul Central District Prosecutors’ Office, said at a press conference yesterday.

The contents of the transcript became an issue in last year’s presidential race when a ruling Saenuri Party representative claimed that Roh had disavowed the Northern Limit Line, the de facto border in the Yellow Sea, in his conversation with North Korean leader Kim Jong-il. That allegation hurt the campaign of Moon, the liberal opposition presidential candidate.

The fate of the transcript itself became an issue when it was discovered the original was not in the National Archives where it belonged. A copy was held by the National Intelligence Service and another was restored from Roh’s personal computer records in his hometown of Bongha Village.

Since August, a team from the Seoul Central District Prosecutors’ Office has investigated the disappearance of the original transcript. Former aides of the late president, including Moon, were questioned, while a team of digital forensic experts spent weeks investigating 7.55 million files and other confiscated evidence to find out why it was never handed over to the National Archives.

“Although they merely followed the president’s order, omitting the transcript from the National Archives and deleting it in an abnormal way are grave crimes,” the prosecution said.

According to the prosecution, Cho made his first report on the 2007 summit transcript through the e-jiwon system, the electronic administrative program used at the Roh Blue House, on Oct. 9, 2007. After Baek approved it, it was reported to Roh and obtained his final approval on Oct. 21, 2007.

At the order of Roh, Cho revised the transcript and created a record designated as top secret. He reported this to Roh through Baek some time between late December 2007 and early January 2008, the prosecution said.

Roh then ordered the revised version to be kept at the National Intelligence Service and designated it as top secret, unlike the record of the 2000 inter-Korean summit between Kim Dae-jung and Kim Jong-il, which was a level-two secret; a lower designation.

Roh ordered the electronic file in the e-jiwon system deleted, so no transcript of the summit was left at the Blue House.

According to the prosecution, Baek and Cho followed Roh’s order and submitted a copy of the transcript to the National Intelligence Service on Jan. 2, 2008, and asked the spy agency to designate it a top secret file.

(When the summit controversy intensified earlier this year, Nam Jae-joon, who heads the National Intelligence Service under the Park Geun-hye government, declassified the record and made it public.)

Meanwhile, Cho destroyed a hard copy of the transcript that he had printed out and deleted the electronic file from the e-jiwon system by using a special technical method some time between Jan. 30 to Feb. 14, 2008. The system is designed to not allow files to be deleted.

“The file was deleted in an abnormal way,” Kim, the lead prosecutor, said at the press conference.

The investigation also revealed how the transcript file remained in the e-jiwon system that Roh kept privately after his term ended.

When he left the Blue House in 2008, Roh made an unauthorized copy of the system and took it to his home in Bongha Village, but later surrendered it.

When the Blue House e-jiwon system was shut down to be handed over to the National Archives on Feb. 14, 2008, Cho accessed the system, created a memo to Roh and attached the transcript. It was then copied to the Bongha e-jiwon, the prosecution said. The memo, retrieved by the investigators, showed that Cho reported to Roh that the transcript was deleted from the original e-jiwon.

The ruling Saenuri Party said yesterday it respects the prosecution’s conclusions and that Moon must issue a public apology for the political mess the deletion had brought about.

“Moon served a top position in the Roh government, but he failed to provide an accurate account of what had happened,” Representative Yoo Il-ho, a spokesman for Saenuri, said. “He used the transcript to serve his political purposes and stirred up a lot of trouble ... As a responsible politician, he must apologize to the people.”

“The announcement showed the public once again the true nature of political prosecutors,” the Roh foundation said in a statement. “It was an expected conclusion from a politically motivated investigation.”

Meanwhile, a separate but related investigation by another team of prosecutors against high-profile Saenuri politicians who first raised the transcript issue will continue.