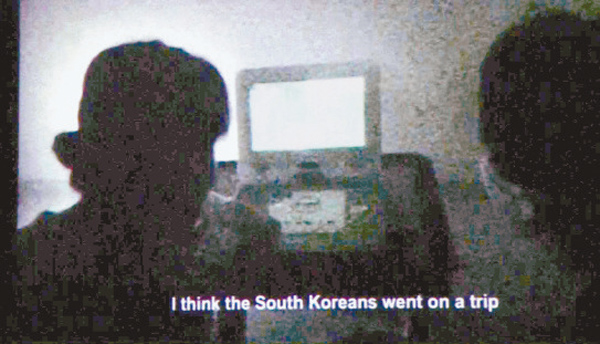 Two North Koreans watch an episode of “Grandpa Over Flowers,” a popular South Korean reality TV show, on a laptop computer. “I think the South Koreans went on a trip to Russia or Europe,” one says. [Screen capture from the video clip]

LONDON - A British broadcaster will air a series of video clips showing North Korean citizens enjoying illegally obtained South Korean dramas and foreign movies. The footage for the upcoming documentary was secretly filmed inside the reclusive state with the help of North Korean defectors.

Channel 4, the British television channel, will air the 45-minute film, titled “Life Inside the Secret State,” at 11:05 p.m. (GMT) on Nov. 14. The project - produced and directed by James Jones with the help of Jiro Ishimaru, chief editor of the Asia Press, and a group of North Korean defectors - provides a glimpse of life in the Communist nation.

In one scene, a North Korean boy with a shaved head, who looks to be about 10 years old, appears in front of a string of female vendors squatting at a village market. The child reaches into his coat pocket, presenting an envelope to the group.

The package, which contains a bundle of pirated movies and television programs, is “from the outside world,” the boy proclaims. He then proceeds to hawk his merchandise to passersby - one CD for a set price, a discount if they buy five.

In another scene, viewers are taken inside an ordinary family home, where portraits of Kim Il Sung and Kim Jong-un, North Korea’s two late statesmen, adorn the walls. In a dark room inside the house, two women sit in front of a single laptop, mesmerized by what they’re watching.

“Is this Soviet Union or Europe?” one of them whispers.

As it turns out, the two ladies are watching “Grandpas Over Flowers,” a reality TV show that aired in South Korea on the cable station tvN three months ago. The show chronicles four older South Korean actors as they travel through Europe.

Suddenly, the two women - who are obviously enjoying the program in secret - are jolted upright by a knock on the door. They quickly slam the computer shut.

“Life Inside the Secret State” appears to have been filmed by an individual, or multiple people, inside North Korea, who then move over into China. There, viewers meet a man identified only as Mr. Jeong.

Jeong admits to circulating USB drives and CDs containing South Korean entertainment, meeting North Koreans at border regions in China to sell his pirated material. “Among the foreign films that I recently smuggled into North Korea, I think [the James Bond movie] ‘Skyfall’ is the most popular,” Jeong said in the documentary.

Jones, the director of the documentary, mentioned North Korean defectors as contributors.

Before, it was widely speculated that North Koreans illegally obtained South Korean films from China; the documentary provides the first concrete look at such events.