MD is diplomatic quandary for Seoul

MD is diplomatic quandary for Seoul 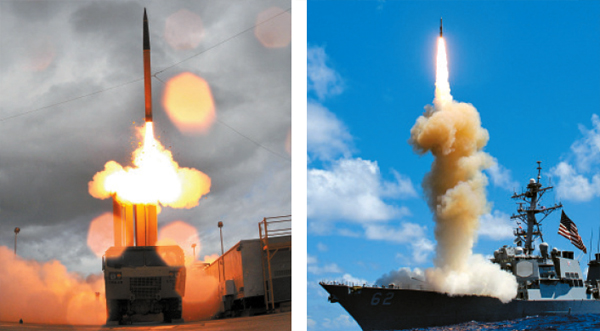 Korea faces a hard choice over whether to purchase more sophisticated missile defense systems such as the SM-3 ( right ) or the Thaad (left), which has diplomatic repercussions and will also be very expensive. [JoongAng Ilbo]

The Ministry of National Defense is walking a tightrope in figuring out how to beef up South Korea’s missile defense system against strikes by North Korea.

The key issue is whether it will upgrade the Korea Air and Missile Defense system (KAMD) by adopting missile shield technologies capable of intercepting hostile incoming missiles at higher altitudes, closer to where they were launched.


The higher the altitude range, the more likely it is for intercepting missiles to hit enemy missiles, according to multiple reports published by the Korea Institute for Defense Analyses. The success rate goes even higher when the interceptor can hit the target in a mid-course phase rather than closer to its intended target in the South . 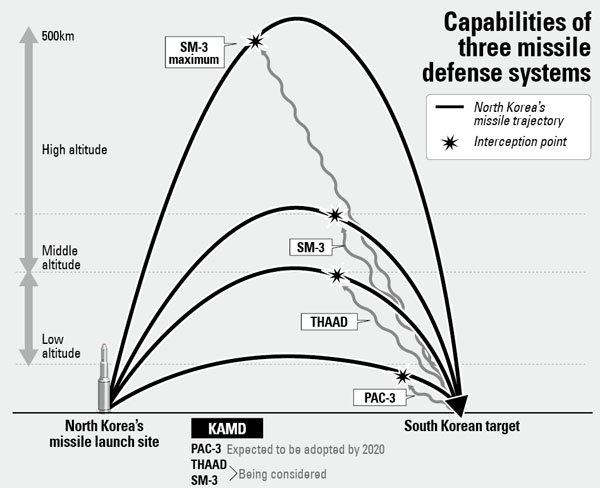 Technical details aside, Korea’s choice will have important symbolic implications in balancing its relations with the two great powers: the United States, its traditional ally, and China, an emerging superpower and Korea’s top trading partner.

The widely-held consensus is that the adoption of the leading systems would be a step toward integrating Korea’s defense into the U.S.-led missile defense architecture - a move that would upset both China and liberal-leaning locals who want moderate independence from the U.S. defense system.

But calls for upgrading to the higher-altitude systems are growing louder, especially after the North’s third nuclear test last February and its successful launch of a rocket in December 2012 that many analysts say was a thinly disguised attempt to test an intercontinental ballistic missile.

“For the Park Geun-hye administration, this issue is like a minefield to traverse,” said Hong Hyun-ik, a senior research fellow at the Sejong Institute. “This is a really high-stake issue, but the delicacy of Korea’s geopolitical position will give the government a hard time to decide.”

The KAMD, which was only launched in 2006, currently incorporates South Korean missile defense radars with early-warning data from American satellites. When an American satellite detects missiles coming from North Korea, it signals a missile interceptor system in Korea called the Patriot Advanced Capability-2 (PAC-2), and other ship-based interceptors to shoot down the enemy missiles.

The PAC-2 technology, which is used by many U.S. allies such as Israel and Turkey, is designed to intercept a missile flying at a 15-kilometer (9.3-mile) altitude or below during the terminal phase, meaning as it approaches its target. The ministry plans to upgrade the defense system to PAC-3 technology by 2020, but even then the range will only increase to 30 kilometers.

Some defense experts make the case that the Patriot-based KAMD is not robust enough to deter the North’s increasing capability to launch more sophisticated missiles.

“PAC-2 alone may be capable,” Victor Cha, Director of Georgetown University’s National Resource Center for Asian Studies, told the Korea JoongAng Daily. “The problem is that the North’s missile threat is evolving and growing, so the ROK cannot afford to take a status quo view of missile defense. It must build capabilities for the future, not for the present.”

Thaad can intercept incoming ballistic missiles at an altitude of 40 kilometers to 150 kilometers and the SM-3 at 70 kilometers to 500 kilometers. The ship-based SM-3 system is capable of destroying enemy missiles during the middle of their flights.

One of the most explicit calls for the higher altitude system came in a paper published in July by Kim Byeong-yong, a researcher from the Korea Institute for Defense Analyses, a research institute under the Ministry of National Defense.

Kim said that Korea needs to deploy the Thaad or SM-3 to keep pace with the rapid advancement of North Korea’s missile programs.

“But the Thaad can destroy enemy missiles at wider ranges and at higher altitudes and the SM-3 is capable of hitting targets at a distance of 400-500 km. Thus, the two systems are more effective in intercepting missiles,” he wrote. “Discussion is needed to adopt the systems.”

“For years, the United States has urged South Korea to deploy a more capable missile defense system that included a mixture of interceptors as well as integrating the sensors into the more comprehensive allied defensive system,” said Klingner in an email interview with the Korea JoongAng Daily.

“Frankly, it is baffling why Seoul prefers choosing a less capable system to protect its citizens against the 800 North Korean missiles already deployed, which could be equipped with nuclear and chemical warheads.

“Adding a medium-tier missile such as Thaad provides a greater protective bubble and more reaction time. To use a soccer analogy, South Korea is insisting on only having a goalie and refusing to have a second line of defense.”

Given that the two systems are core parts of the U.S. national missile defense system, experts and lawmakers warn that China and Russia are almost destined to resist the move - and China might even feel a target of the technology, even though it’s defensive.

“If Korea introduces the Thaad or SM-3, China will fall within the extended missile or radar range, which will not only provoke China but fuel a regional arms race,” said Hong Hyun-ik of the Sejong Institute.

“When I met China’s chief nuclear envoy Wu Dawei,” said Ahn Gyu-baek, a Democratic Party member who serves on the National Assembly’s defense committee, “he indirectly expressed his concerns about possible further missile defense cooperation between the U.S. and Korea. To China, the purchase [of the Thaad and SM-3] can be interpreted as a step closer to Korea’s incorporation into the U.S. missile defense system.”

But supporters of the more sophisticated technology say that China’s potential anger is likely to be little more than tough talk.

“Most missile defense today is meant to defend against a few missiles launched from rogue states like Iran or North Korea,” said Robert Kelly, political science professor at Pusan National University. “It’s not designed to shield against a major launch of tens or hundreds of missiles from countries like China or Russia. China also knows that the North is frightening to Japan and South Korea. So, despite its tough talk, I don’t think they will do much. Can they really expect South Korea and Japan to not defend themselves?”

Another significant issue is the astronomical cost of new technology, which analysts say is bound to surpass 1 trillion won ($940.2 billion) for either the Thaad or SM-3 systems.

“We should remember a missile defense system can’t be a cure-all measure,” said Hong of the Sejong Institute. “A missile launch takes place in a matter of minutes or sometimes seconds. Let’s say North Korea fires several missiles at once. Then, the success rate of targeting and destroying them goes even lower. So, I don’t think it’s a wise move to pour trillions of won into the upgrade.”

Dancing around the question

The issue of South Korea adopting either the Thaad or SM-3 technology has been on the radar of policy wonks, but it was not until last month that the defense authority openly discussed the issue.

That discussion, however, has been characterized by the possibility of strategic flip-flopping. The Defense Ministry said on Oct. 14 that “the combination of existing missiles and the SM-3 missiles could boost Korea’s missile defense” in a report submitted to Yoo Seung-min at the National Assembly’s Defense Committee during the parliamentary audit. On the following day, spokesman Kim Min-seok said that the Defense Ministry was seeking ways to develop “multi-layered” deterrence against North Korea.

“The use of the phrase ‘multi-layered’ indirectly shows the ministry’s intention to buy Thaad or SM-3 because the current program can operate only at low altitude,” Hong of the Sejong Institute said.

The ministry added that it was mulling plans to bring in an additional missile defense system for altitudes below 100 kilometers.

Many interpreted that statement as meaning that Korea was eyeing the Thaad system, which has an altitude range of 40 kilometers to 150 kilometers.

But the next day (Oct. 16), Defense Minister Kim Kwan-Jin said Seoul was not considering the purchase of either system. He stressed that Korea has no plan to join the U.S.-led missile system. But speculation continues and the local media has reported that the South Korean military requested detailed information about the Thaad system from its manufacturer, Lockheed Martin.

Analysts say pressure from Washington - explicit or implicit - will only strengthen going forward.

“The pressure on South Korea will only grow as the larger American-Chinese competition grows, because the days of America as the world’s only superpower have gone,” Kelly said.