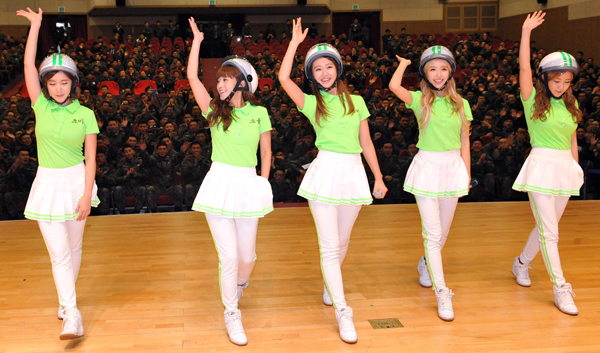 A mystery man charged past security and attempted to hug Cho-a, a member of the girl group Crayon Pop, as she was leaving the stage following a concert last week in Cheonan, South Chungcheong, according to the group’s agency, Chrome Entertainment, yesterday.

The man, apparently a fan of the group, was wearing a grey hooded jumper as he approached the singer. The group’s manager stopped the man.

The agency issued an explanation yesterday because a video of the incident went viral, bearing the title “Crayon Pop Cho-a being sexually harassed.”

Cho-a tried to avoid the mystery man, and nothing more happened after he was stopped.

The group’s agency told local media that the stage was very close to the audience and that all the band members were shocked by the incident. But it has decided to consider the incident an anomaly, caused by the group’s popularity, and downplay its seriousness.

Chrome also said it doesn’t plan to report the man as nothing that happened in the video can be considered to be sexual harassment.
By Lee Sun-min