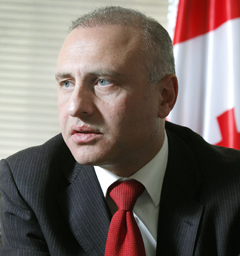 As the first Georgian ambassador to Korea, Nikoloz Apkhazava was busy getting the new embassy operational all last year. The opening of the embassy marks the increasing activity between the countries. Although the Korean Embassy to Georgia has yet to be established, the two countries are extending partnerships in many fields. The business potential of Georgia was highlighted when the country announced a $1 billion hydropower project, a move that attracted the interest of Korea’s state-run power providers.

The Korea JoongAng Daily sat down with Apkhazava, who has worked in Seoul since February last year, to discuss the potential fields of cooperation.

Q. Georgia recently opened its embassy in Seoul. How is the relationship between Georgia and Korea?

A. Asian countries hold promising prospects and Korea is one of them. Georgia also has strategic interest in Korea. The relations between Georgia and Korea are dynamic and friendly and now moving in the right direction, based on mutual respect. In particular, Georgia supports Korea’s candidacy at multilateral institutions. For example, when Korea sought to secure a nonpermanent seat on the United Nations Security Council last year, Georgia supported Korea. We also backed Seoul when it vied to host the headquarters of the Green Climate Fund.

Last year, the two countries had the first political consultation between their foreign ministries in the capital of Georgia. The second consultation will be held in December in Seoul. For the meeting, the deputy minister of foreign affairs will come to Seoul with a delegation. The two countries’ deputy ministers will discuss a wide range of issues, including political, economic and trade issues. They will also discuss how to cooperate at multilateral international organizations.

You needed to build everything necessary for the embassy last year. What’s the meaning of opening an embassy in Korea?

Last year was really busy because we need to start from scratch. It’s always difficult when you start from zero. Everything was challenging. There can be relations and exchanges between two countries even if there is no embassy, but once the embassy opens the relationship can be more dynamic. We can talk directly with the Foreign Ministry here - not through some kind of mediator. Korea doesn’t have an independent embassy in Georgia now, but, in order to build a closer bilateral relationship, an embassy is not just something desirable but necessary. So, we are trying hard to convince the Korean government to support the building of embassy. Despite those efforts, the opening of an embassy has been postponed due to budget issues. Still, we understand that there are budget cuts across the government and the Ministry of Foreign Affairs is also suffering.

It’s important to have people-to-people contacts for bilateral relations, and those contacts are usually done through cultural programs and tours. How many Korean tourists visit Georgia?

The number of Korean tourists has steadily increased and now has reached 4,000 a year. Before the embassy opened, the number was 2,000. Georgia is attracting visitors because it allows people to engage in diverse activities in different settings, like hiking, skiing and sightseeing at the Black Sea. Georgia is a place where you can go to ski in the morning and then you can see the Black Sea on the same day. Additionally, what attracts tourists is Georgia’s reputation as one of the oldest wine-producing regions of the world. They can come and appreciate quality wine and even engage in wine-making tour programs.

Do Korean companies know about the business opportunities in Georgia? Can you explain the business environment there?

I am interested in Korean investment and the embassy here would like to work on facilitating their investment. Fortunately, Korean businessmen appear to notice business opportunities in Georgia. The Georgian government is in the middle of a big push to develop hydropower projects and Korea’s Kepco is very interested in this. Some 70 percent of hydropower is untapped, which means those projects have huge potential. This is a big project, but, at a smaller level, there are also Korea’s small- and medium-sized enterprises operating. They are well-received and satisfied with the business environment. We have a very flexible, liberal business environment.

Georgia has been ranked No. 8 as a business-friendly country. We are right behind Korea, which holds 7th place. The survey measured how much countries have made progress in registering companies and property, paying taxes and enforcing contracts.