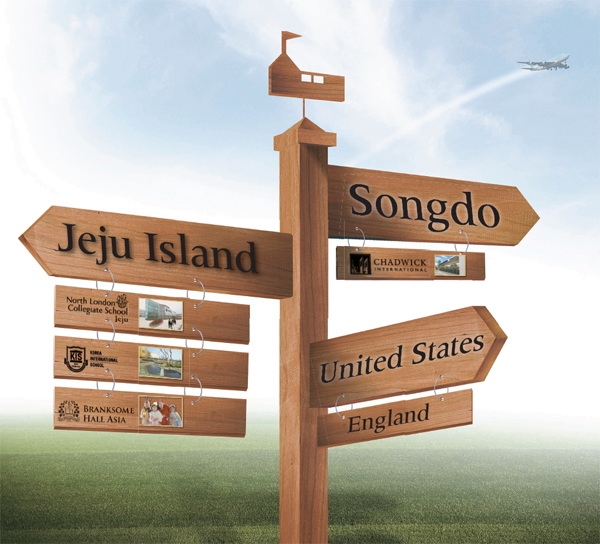 Hot potato, pie in the sky and sour grapes: All three food metaphors are often used when describing international schools in Korea.

Unlike foreign schools, which only accept the children of expatriates or local children who have lived overseas for more than three years, international schools are open to any Korean who is willing to pay the hefty tuition (except for Chadwick, which limits Koreans to 30 percent of all students).

Tuition varies depending on the school, but it can cost as much as 35 million won ($33,085) per year - that works out to around 450 million won to educate a single child from preschool to 12th grade.

Education at such schools comes at a dear price, but the biggest virtue of these international schools is that parents are able to stay with their children without worrying about them being left alone in a foreign country at a young age.

These schools were approved of and launched by the Ministry of Education to channel the need for students going abroad to study back into Korea by providing them institutions that can offer the curricula of elite American or British schools.

Some instantly applied for the schools, but some other parents are still undecided about the international schools because all of them are in their early stages without tangible outcomes such as a college acceptance rate, which is considered one of the key factors for Korean parents when they choose advanced schools for their children.

Thus the JoongAng Ilbo met numerous mothers who sent their children to international schools in Songdo and Jeju to talk to them about this new institutions.

Escape from the private education craze

Shin Mi-seon, 41, moved from Bundang District, south of Seoul in Gyeonggi, to Daechi-dong in southern Seoul for the future of her child. Daechi-dong is famous for being the hub of hagwon, or private educational institutes and cram schools.

Ironically, however, it was not long before she decided to escape Daechi-dong, relocating instead to Jeju, where her child now attends North London Collegiate School.

“I moved to Daechi-dong with little knowledge of the life there. Looking at my nephew who is a middle school student, I realized how hard it is to live in Daechi-dong [for a child],” said Shin.

“Right after school, he goes to hagwon to take math and English classes, and gets back home around 11 p.m., being totally exhausted. I thought to myself that my child would live like him as long as we live in Daechi-dong.”

Shin and her child moved to Jeju, leaving her husband in Seoul, where he works.

Kim Eun-ji, 39, who sends one child to NLCS Jeju and another to Branksome Hall Asia, says school life is hectic in Jeju, too, but it is a much more positive experience.

In Seoul, time that was spent shuttling between hagwon and cramming is now spent doing school assignments that require thinking and finding out solutions by themselves.

“Children are busy in Jeju, but they spend their time in different ways,” said Kim.

Some parents choose international schools for the future of their children, but some do it for themselves. Gang Ji-young, 42, moved to Songdo from Mok-dong, western Seoul, which is another hagwon hub like Daechi-dong.

“Before I came to Jeju, I had this thought in the back of my mind that I would send my child back to Seoul if I’m not satisfied with the school,” said Gang. “But I’m happy with everything, and I feel like I’ve found my own life in Songdo.”

Gang said that in Mok-dong, she felt like a “helicopter mother” - meaning a mom whose life revolved around her children’s studies, doing little but shepherding her daughter from hagwon to hagwon.

At Chadwick International in Songdo, though, the priority for students is self-study, giving Gang more freedom.

But not every mother is pleased with her decision.

One 41-year-old mother whose two children attend Branksome Hall Asia said that she found it hard to adapt to life on Jeju.

“The school and my house are located in the middle of nowhere,” said the woman, who wanted to be identified only by the surname Kim. “I have to drive at least 30 and 40 minutes whenever I need something from the grocery store. I see many mothers who are suffering from depression.”

Song Su-hyun, 40, who lives apart from his husband, sends her three children to international school in Jeju.

“Life is pretty simple because there are a few things you can do,” said Song. “Naturally, mothers get closer in the beginning, but those relationships often go sour from misunderstandings.”

Some parents who move out of Seoul in hopes of getting away from the private education craze find it worse in Jeju and Songdo.

“There are private institutes that offer English and math classes in English,” said Lee, 35, whose child attended NLCS Jeju. She wanted to be identified by her family name only.

“Private education is not an option but a must in Jeju,” she said. “In addition, it’s even harder than Seoul because you have to drive up to 40 minutes to take your kids to a hagwon.”

But some parents strongly disagree.

“Children go to many hagwon, but [in Songdo] they learn extracurricular activities like fencing or the trumpet, not math and English,” said Lee Eun-ah, 43, who moved to Songdo from Bangbae-dong, southern Seoul.

Most of the international schools declined to comment about their ratio of foreign students, except the Korea International School Jeju.

At KIS, only 3 percent of students are non-Koreans - mostly the children of the foreign teachers who work there.

“I saw one mother who transferred her child to a boarding school overseas,” said Shin, the woman who moved to Jeju from Daechi-dong. “She made the decision because her child’s English didn’t improve as she expected.”

Unlike other schools, Chadwick International has a quota for its ratio of Korean students, limiting Korean nationals to 30 percent, although that quota will increase to 40 percent next fall.

But even Chadwick does not provide a 100 percent English environment. At Chadwick, Korean language and Korean history classes are conducted in Korean. Inside the school, students are also allowed to speak in Korean whenever they talk to Korean faculty members.

“We discussed it [using Korean inside the school] several times and decided to let students speak Korean,” said Lee Hye-young, a representative of Chadwick. “We thought speaking their mother tongue would help them pick up English easily.”

Around this time of the year, all four international schools receive numerous inquires about the admissions process for the next semester. They also conduct large-scale presentations about their schools, with thousands of parents flocking to learn more.

But what parents most want to know is whether these schools will guarantee the children a higher chance of getting into prestigious universities.

Yu Min-jeong, who has a child attending Chadwick, is one of them.

“I feel insecure because there are no results that can prove the school’s excellence in terms of college acceptance rate,” she said.

For this reason, many parents are keeping an eye on the first graduating class of Chadwick, which is due in 2016.

“I try not to worry by thinking how the school’s diverse education will help my child when he goes to college overseas.”

Three of the four international schools are based on the International Baccalaureate program, or IB for short. (Only the Korea International School had an independent program that offers College Board Advanced Placement credits).

The International Baccalaureate is an educational foundation in Geneva, Switzerland, which offers educational programs for children aged 3 to 19.

The program was invented to provide equal educational standards for the children of diplomats and businesspeople who are relocated overseas for work for a short time.

Currently, the IB program has been adopted by 3,700 schools across 145 countries.

In order to provide an education based on the IB program, a school has to be certified by the IB headquarters, which maintains difficult standards.

Advanced Placement classes are not recognized by Korea’s Ministry of Education, and AP students are not allowed to write Korea’s college entrance exam.

According to Representative Shim Jae-chul, a member of the ruling Saenuri Party’s Supreme Council, 21.6 percent of students at NLCS Jeju left the school between September last year and this September.

During the same period, 14.6 percent from KIS Jeju, 14.5 percent from Branksome Hall Asia and 7.8 percent from Chadwick also ended their studies at each school. 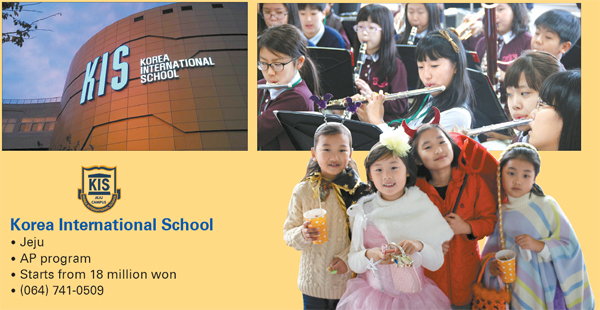