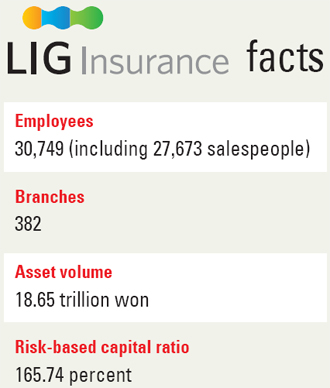 With LIG Insurance, the country’s fourth-largest non-life insurance firm, for sale, the focus is on potential buyers.

Analysts say LG Group, which withdrew its presence in the financial world after selling its shares in its card affiliate in the aftermath of a liquidity problem following the credit card crisis in 2003, could be a potential buyer of LIG Group if others re-enter the industry.

Private equity funds may also be interested, they say.

“Although it is too early to say, financial groups including KB Financial and Shinhan Financial Group are being pointed to as potential buyers,” said Lee Chul-ho, an analyst with Korea Investment and Securities, in a report. “LG Group and other affiliates of the conglomerate could also participate in the bidding.”

Seo Bo-ick, an analyst at Eugene Investment and Securities, said, “If financial groups that do not have their own general insurance business acquire LIG Group’s non-life insurance unit, it would be a win-win scenario.

“Companies with abundant capital could also be an option that would lead to a favorable scenario for LIG Insurance.”

On Tuesday, LIG Group said it would sell all 20.96 percent of its shares in its non-life insurance unit to compensate small investors that lost money on high-risk commercial paper of the group’s construction arm due to financial fraud in 2011.

The shares are owned by LIG Group Chairman Koo Cha-won and his family members. The decision to give up the shares in LIG Insurance was announced after the conglomerate said last week that it would fully compensate retail investors “to be socially responsible.” It also said “the funds will be raised by having the largest shareholder [Koo and his family] give up private property.”

The sale of LIG Insurance is the latest addition to the crowded merger and acquisition market in the financial industry.

Sales of Woori Investment and Securities, Kyongnam Bank and Kwangju Bank are in progress in line with the government’s efforts to privatize Woori Financial Group.

In addition, KDB Daewoo Securities is also expected to be put up for sale once the deal involving Woori Investment and Securities is completed.