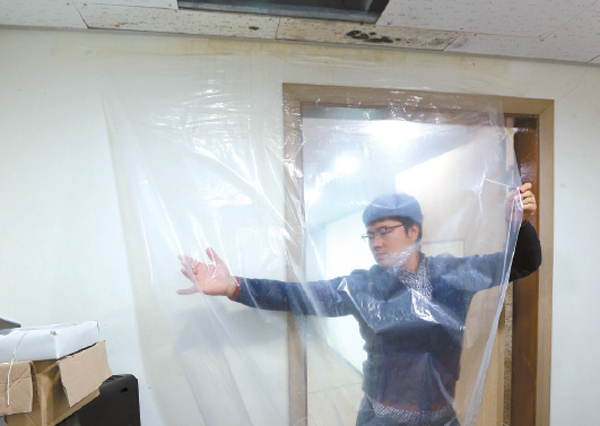 A worker uses a plastic curtain to drain water leaking from a ceiling into a bucket at a community welfare center in Gangseo District, Seoul, on Nov. 11. The ramshackle building has not been repaired since it was built in 1994. By Kim Seong-ryong

At a community welfare center in Gangseo District, southwestern Seoul, a group of 50 seniors were clapping and singing during a music program, following along with an instructor. On either side of the instructor were buckets slowly filling up with water dripping from the ceiling. Constructed in 1994, the 19-year-old building leaks when it rains, and has cracks in the structure and even moss growing up the walls.

“The city provides us with tens of millions of won for repairs every year,” said Kim Dong-ju, the maintenance manager for the center. “But that falls far short of what’s needed to repair all the worn out, damaged parts of the building. There are too many of them.”

The situation is unpleasant and even dangerous for the seniors who use the center.

“All the floors in the building are soaked with water dripping from the ceilings,” said local resident Han Jae-hyung, 84. “I even get scared sometimes.”

Gangseo’s welfare center is but one of the many centers in the country suffering from maintenance problems. According to the Ministry of Health and Welfare, 177 welfare centers, or 41 percent, of the 437 centers throughout the country were built more than 20 years ago.

The centers are used for various activities by local residents, from senior programs to health centers, depending on the needs of the community.

Efforts to repair or remodel aging welfare centers are being thwarted by the costs being forced onto local governments without much help from the central government.

“The government subsidy is too meager to undertake overhauls of the centers,” said Shin Yong-gyu, director at the Korea Association of the Social Welfare Centers. “The central government and local offices should join hands in assessing the conditions of the centers and coming up with ideas for repairs.”

And local governments can be overly frugal, too. The Seoul Metropolitan Government got strict in 1999 when it instituted a policy that districts should have one welfare center per 100,000 residents, and subsidies were cut for extra centers.

Under this policy, Gangbuk District Office, which runs five welfare centers for 340,000 district residents, only gets subsidies for maintenance of three centers, leaving two in financial distress.

“Each district in Seoul has different needs for its residents depending on their education and income levels,” said Kim Mi-hyun, a researcher at the Seoul Welfare Foundation. “Determining whether a district needs a government subsidy just by looking at the number of centers per 100,000 citizens is a typical bureaucratic measure that fails to look at the real needs in a community.”

Welfare centers in provincial regions get even fewer funds. The entire budget in North Jeolla for centers is 280 million won ($265,440) a year while South Chungcheong spends 260 million won a year. Their centers receive subsidies of about half of what centers in Seoul receive.

“Labor and program costs account for 87 percent of a welfare center’s budget,” said Jung Moo-sung, a professor of social welfare at Soongsil University in Seoul. “The amount of funds a center receives is directly linked to the quality of programs it offers.”