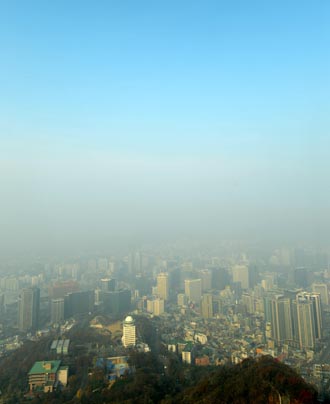 Downtown Seoul, seen from N Seoul Tower on Mount Namsan, is barely visible yesterday as a thick gray haze suspected of being caused by air pollutants blown from China descended upon the capital city. [NEWSIS]

Winter will be here soon, and already a noticeable haze has descended over Seoul and other stretches of the country. Blown in by east-moving winds, much of this pollution can be sourced back to China’s heavy industries hundreds of miles away.

And as air quality conditions in Korea have continued to worsen over the past few months, questions have been raised over whether the government has implemented a reliable public warning system for pollution, and if that system is timely as well as accurate.

To the casual observer, it may not seem like the most pressing national security issue, but air pollution is a particularly dangerous hazard precisely because it’s not always visible, allowing it to fly under the public’s radar as citizens go about their day-to-day lives.

This, health and environment experts contend, is exactly why a reliable early warning system is so important.

“[Pollution in the air] can infiltrate deeply into the respiratory system, causing asthma and lung disease,” said professor Jang Jae-yeon from the department of preventive medicine and public health at Ajou University. “They can also get into the blood vessels and cause cardiovascular problems, increasing the risk of stroke.

“Just because the daily average [pollution level] is low, that doesn’t mean that the entire day is safe,” Jang added. “The government must issue warnings more proactively to protect the public.”

The government’s current public warning system works by taking a measurement of the particle pollution found in a certain volume of air. Measurements and forecasts are made for each city and province, but currently the warning system only accounts for the daily average in the capital region, which encompasses Seoul, Incheon and Gyeonggi - a wide swath.

Officials hope to have a nationwide warning system up and running by February, but the initiative is still a work in progress. So far, forecasts and warnings have been issued sporadically or not at all. Inaccurate or misleading forecasts have also dented the current system’s credibility.

Air pollution, or particle pollution, is produced when moisture in the air is combined with fine particle matter. Particles less than 10 micrometers in diameter - known as PM-10, which is about one-seventh the width of a single human hair - are small enough to be inhaled into the lungs. This type of pollution can also contain other elements like smoke, nitrates, dirt or metals, and make the air appear hazy. 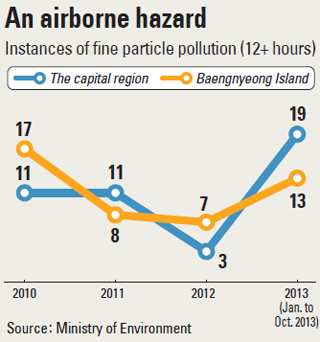 Scientists and environment officials are most concerned about particles smaller than PM-10. Fine particle matter, considered anything that is 2.5 micrometers in diameter or less, is especially dangerous. These types of particles are directly emitted from power plants, car exhausts or smoke, and usually contain various chemical elements. PM-10 and smaller particles have especially serious health implications because they are easily inhaled.

Officials at the Ministry of Environment have long acknowledged that fine particle matter from China is dirtying the skies of its neighbors to the east; Environment Ministry officials have even gone so far as to hold a series of meetings with their Chinese counterparts to address the issue.

Fine particle pollution from China has been particularly bad in recent weeks, they say, which has increased the need for a nationwide public warning system.

According to the ministry, China’s dependency on coal is about 70 percent, and air contamination worsens during peak winter months when Chinese power plants start burning massive amounts of coal for heating. Fine particle pollutants from China are carried by the wind to Korea and even as far as Japan.

“Although there is some uncertainty in accurately distinguishing Chinese and domestic factors [in air composition] with our current modeling technology, we are still partially capable of determining the particles from overseas, so we can analyze the origins [of particular elements],” the ministry stated.

This year, the Air Pollution Index in China’s northeastern industrial zone went up by 40 percent compared to that of 2012.

The ministry also reported that smog was observed more frequently in Beijing and China’s eastern provinces this year. Smog was reported over 10 to 20 days in Beijing, Henan Province and Jiangsu Province - up approximately five to 10 days compared to last year. Smog in highly industrial cities like Beijing usually contains high amounts chemicals and pollution from vehicular emissions and smoke from power plants and combustion, making it a big public health concern.

Local news reports quoted experts as saying that the composition of the particle matter collected from the smog in Korea this year was different from the pollutants generated domestically.

It included neurotoxins such as lead and arsenic up to three times higher than domestic pollutants, those experts noted. ?

In response to the growing unease, the Environment Ministry and the National Institute of Environmental Research established in August its public warning system for the capital region. Currently, that system is being operated as a pilot program.

Ministry and institute officials claimed in August that the system would be expanded nationwide this month. However, they postponed it to February, admitting that they weren’t yet prepared to make the shift.

Based on current operations, the system still has kinks that need to be worked out.

On Friday, Nov. 15, at about 9 p.m., the measurement of particle matter taken from Seondan-dong, Pocheon, of northern Gyeonggi, was 153 micrograms per cubic meter.

If the average PM-10 concentration is forecast to be more than 80 micrograms the next day, the Korea Meteorological Administration is supposed to post a warning on its website around 5 p.m. the day before.

However, no forecast was made on the afternoon of Nov. 15, nor were any warnings issued.

The National Institute of Environmental Research defended the absence of the posting.

“The daily average for Seoul, Incheon and Gyeonggi was 78 micrograms on [Nov. 16],” said Hong Yoo-deok, a senior researcher at the institute. “[The average] was still below the 81-microgram requirement, so there is no problem.”

Meanwhile, in North Chungcheong, the measurement peaked to an astounding 204 micrograms.

And early on the morning of Nov. 17, smog generated from China reached the Jeju and Jeolla regions. In Jeju, the PM-10 particle concentration reached 290 micrograms at 5 a.m. on Nov. 17, while South Jeolla recorded a daily high of 262 micrograms, and North Gyeongsang recorded 221 micrograms.

However, the ministry never issued forecasts for those areas.

Yet, since August, the institute has only issued four warnings. And an analysis into those warnings has shown that those forecasts were inaccurate.

On Nov. 7, the day of the College Scholastic Ability Test, the National Institute of Environmental Research issued a notice, informing the public that the day’s PM-10 measurement would be between 31 and 80 micrograms, falling into the “normal” category.

The institute also issued warnings on Oct. 29, Oct. 30 and Nov. 2 claiming that particle pollution would be between 81 and 120 micrograms per cubic meter, or “slightly bad.” But with the exception of the notice on Nov. 7, the three warnings issued before were all inaccurate. On all three days, air conditions were actually better than the forecast.

Officials claim the problem lies within the system. And experts have said that the current practice of issuing a forecast only when conditions are expected to be poor is also impractical.

“Whether the air quality is predicted poor or not, [the government] must issue a forecast every day,” said Choi Ye-yong, head of the Asian Citizens’ Center for Environment and Health. “And the daily average may not be high, but the measurement could be drastically high for a certain period of time. In that case, warnings should be issued so that the public can [take necessary precautions].”

The institute acknowledged, however, that they are still working on perfecting the system. “Although there have been many shortcomings, we will try our best to post the forecast every day once we start operating the system fully in February,” an official from the institute said. “We will also consider a plan that provides contamination notices every hour.”