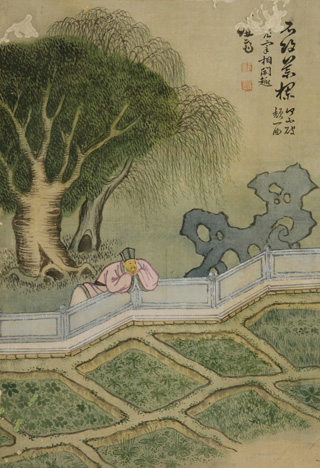 “Old Chancellor Leisurely Gazing at the Garden,” by Jeong Seon. Ahn Hwi-joon, chairman of the Overseas Korean Cultural Heritage Foundation, hopes the repatriation of artifacts leads to more interest and research. Provided by the foundation

He says the faulty restoration of Sungnyemun, National Treasure No. 1, occurred because officials didn’t take enough time. Korean authorities finished restoring the 600-year-old historic gate, which was destroyed in a 2008 fire, in May, but the gate was found to have been restored poorly, already showing signs of damage.

Ahn met with reporters as the foundation is holding an exhibition on the paintings of legendary Korean landscape painter Jeong Seon (1676-1759) returned from Germany in 2005. He shared his thoughts on the exhibition, the issue of repatriation of artifacts kept overseas and other pending issues regarding cultural properties. 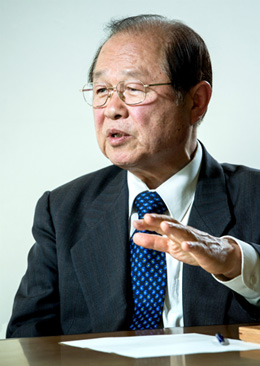 Q. What is the significance of the exhibition of the paintings of Jeong Seon?

A. Oftentimes, once an artifact is returned and the media hype is over, people forget about it and research on it is not done properly. However, just as important as getting back our artifacts is how they are being kept, studied and utilized after the return. I hope the exhibition on the paintings of Jeong Seon and the publications of books on the subject become a “model case” [where repatriation leads to continued interest and research.] It is also crucial that we keep close, friendly ties with the organization that returned the artifacts, which the Waegwan Abbey [which got back the paintings] and St. Ottilien Archabbey [which returned them] have been doing all these years.

What is the most difficult thing in the repatriation of artifacts kept overseas?

I divide artifacts kept overseas into three categories: One is items that are displaced through illegal routes like looting and stealing. These, I believe, must be returned. Another is items that were given by us through diplomatic ties, friendly relations. These, I think, are better left wherever they are and be well-utilized there. Another is items that we don’t know how they were taken out of the country. These actually take up a large amount - I’d say about half of the artifacts that we know to exist overseas. They require investigation. Many important Korean artifacts are in China or Japan. Many of those in China belong to the second category, but such is not the case with those in Japan. However, the diplomatic relations between Korea and Japan are at one of their lowest points, which is a big hurdle for us to do our job.

Speaking of Japan, what are your thoughts on the Buddhist statues of Korean origin that Korean thieves stole from Japan last year? Korean historians are quite sure that at least one of them was stolen by Japan in the first place. Should they be returned?

I really cannot comment on one specific artifact. However, I can share my philosophy in this issue: Regardless of the country or the era, an illegal act should not be overlooked. In other words, that goes to both Korea and Japan, what’s done now or in the past. This is why it makes it so hard to resolve this issue.