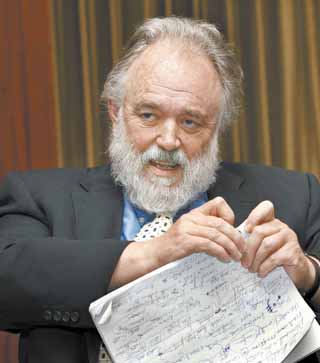 Timothy Mack, president of the World Future Society, speaks about Korea’s creative economy initiative in an interview with the Korea JoongAng Daily at Lotte Hotel in Jamsil, southern Seoul, yesterday. By Park Sang-moon

Despite its namesake, Korea’s creative economy initiative needs to be more creative in its approach to have its impact felt both at home and abroad, according to the head of a U.S.-based future society.

Timothy Mack, president of the World Future Society, came to Korea to attend a forum on the creative economy organized by the Ministry of Science, ICT and Future Planning.

“It is a little bit combative,” Mack said during an interview with the Korea JoongAng Daily yesterday, referring to Korea’s flagship initiative, which the Park Geun-hye administration is pushing to exert global leadership. “I don’t think it’s an entirely new idea, other countries are ahead of it.”

Mack said the initiative, although designed to change the structure of the Korean economy, is following the path of many of its top-down state projects.

He said the initiative, which has earned support only from some big companies, needs to trickle down to small and midsize companies.

“It is not enough of an initiative right now, but I believe the government will move forward and make it much more possible to start SMEs in Korea and nurture them,” he said.

He said cultural change also should be a part of the initiative to help foster an environment where creativity can take root and grow. For instance, he said Koreans’ attitude toward entrepreneurship should change from seeing it as a scourge of failure to a possibility of success.

He said the creative economy should be more about the economy and should be able to contribute to raising the quality of life for Koreans.

“It should be about not just the value in the market, but about what kind of problems it can solve,” Mack said.

The participation of the general public is also indispensable, he said, but it is challenging because of the generational split in confidence toward creativity, worsened by the technological divide.

“I think people under 25 would be more likely to say that they personally embody the creative economy,” he said. “The question is how to put it in a context the general public can relate to.”

Those challenges do not mean, however, that Korea gets no attention for the initiative, Mack said.

The general shift of the global economy toward creativity is creating growing room for a global conversation on the issue, and Korea is encouraging it, he said.

Korea’s prowess in the information and telecommunications sector adds authority to its voice, said Mack, who called ICT a catalyst for the creative economy.

The ITU Plenipotentiary Conference, which Busan will host next year, will help Korea bolster its role in the creative economy, he said.

It is the first time the quadrennial conference, the most important event held by the International Telecommunication Union, will be held in Korea, which is the second Asian host after Japan, the host of the 1994 event.

Top policy makers and experts in the ICT sector from 193 countries will attend the Busan conference, or the ITU PP-14, to be held for three weeks starting Oct. 20 2014, according to the organizers.

During the forum, Yoon Jong-lok, vice minister of Science, ICT and Future Planning, also said that the ITU PP-14 will be a platform on which Korea will share its creative economy initiative with many other countries.

The World Future Society, established in Maryland in 1966, claims 25,000 members from more than 80 countries.