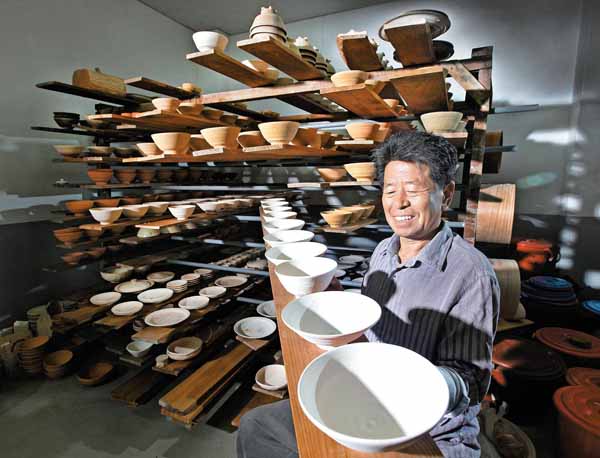 Min Young-gi attentively observes the bowls after a firing before baking them in a kiln. He is a potter whose reproductions of Joseon-era tea bowls are considered the best in Korea.

SANCHEONG, South Gyeongsang - In a remote village in Sancheong, South Gyeongsang, the heat of baking porcelains is enough to melt the earth, wrestling with the cold winds promising the start of winter. This shrine of tea bowls from the Joseon Dynasty (1392-1910) is the workplace of potter Min Young-gi, where Min has made the world’s best tea bowls in the last 40 years.

Joseon Dynasty tea bowls - whether called Ido chawan in Japanese or Goryeo chawan in Korean - have long been the most-cherished type among Japanese tea experts, and back in the 15th and 16th centuries, they were very rare and expensive in Japan. 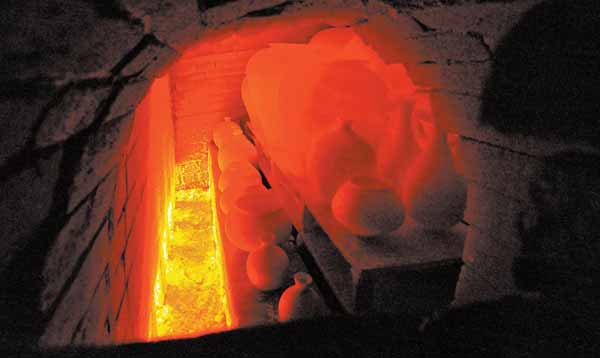 Min’s tea bowls are considered among the best, possessing a sense of historical culture going back 400 years.

That is why, during the Imjin War, when Japan invaded Korea from 1592 to 1598, many Korean potters were kidnapped and taken to Japan. In fact, this was is also called “the Ceramics War” because so many artisans were taken. In the aftermath of the conflict, the tradition was all but eliminated in Korea.

Meanwhile, over in Japan, those kidnapped Joseon potters played an important part of the then-modernization of Japan, bringing the latest in ceramic technology.

Min’s teacups and porcelain pots are baked in a kiln. He creates his best work by heating the kiln to 1,260 degrees Celsius (2,300 degrees Fahrenheit).

Min was introduced to ceramics in Japan. He studied under Nakazato Taroemon, himself a descendant of one of Japan’s most famous ceramic-making families. Min studied there for five years until 1973, mastering the “beating technique” (a traditional technique involving hitting the interior and exterior of a bowl with a board), a method that had been forgotten in Korea.

After the intensive training, Min returned to Korea and in 1978 set up “Sancheongyo,” his own workplace in Sancheong, where he was born. It is a region that was once rich with potters before the Japanese invasion. In fact, you can still find the kiln sites where buncheong and white porcelain were once fired.

Tea bowls are Min’s most famous crafts. Using traditional methods, Min is without peer anywhere in China or Japan. Made on the spinning wheel and glazed, these bowls are well known for their simplicity and dignity.

“Porcelain should touch one’s heart with what one sees, touches and feels,” said Min, explaining about the aesthetic of porcelain that a potter should bear in mind. “Good porcelain should possess a proportionate beauty in its appearance and inner spirit and taste. And it should remain good after a hundred years because good porcelain transcends time and space. I would like to produce the best tea bowls using a relaxing mind, without greed.”