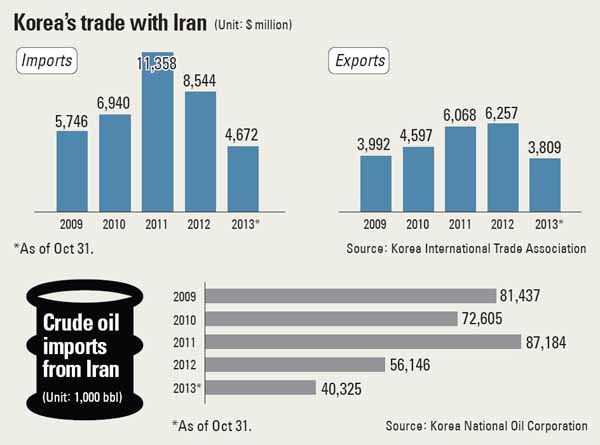 Iran could get as much as $7 billion in relief from economic sanctions over six months in return for limiting its nuclear program, according to the U.S. government.

The interim agreement will suspend certain sanctions on gold and other precious metals, the auto sector and petrochemical products, while providing the release of $4.2 billion in frozen oil assets, the Obama administration said over the weekend.

The United States and European Union imposed strict penalties on most transactions with Iran in recent years and Korea was one of the countries affected, especially when the U.S. National Defense Authorization Act for 2013 took effect in July.

According to data from the Korea International Trade Association (KITA), the nation’s trade volume with Iran in the first 10 months of the year dropped significantly. Korea exported $3.8 billion worth of products to Iran, a 30.1 percent drop from last year, while imports dropped 33.5 percent to $4.6 billion.

Data from Ministry of Trade, Industry and Energy also shows that Korea’s trade with Iran has stalled. The number of companies that do business with Iran shrank from 2,612 last year to 1,361 in April.

By industry, auto parts and steel companies had a particularly difficult time as their exports dropped 87 percent and 90 percent compared to a year ago. In particular, the value of machinery exports plunged from $10.6 million to only $17,000, a 99.8 percent decrease.

“Korea’s automobile and auto parts export value to Iran in 2010 was about $870 million, but it dropped to $230 million last year with the sanctions,” said Kang Sang-min, an analyst at E Trade Securities. “But with the agreement, there is a high possibility that auto parts exports will increase.”

Shippers and ship makers hope to secure more orders as Iran may be able to ship more crude oil.

Local builders also are smiling at the possibility of more construction projects in Iran.

The Islamic Republic has been one of the top five foreign markets for Korean companies since 1975, collecting $12 billion in 88 projects. But since the late 2000s, most have left the country because of Iran’s nuclear program and political unrest.

“If Iran receives sanction relief, it is great opportunity for local companies to re-enter the market,” said an official from the International Contractors Association of Korea. “The projects will not be offered soon, but if the situation gets better, there could be more orders to build social infrastructure and plants.”

In the Korean stock market yesterday, companies that do business with Iran saw their shares rise. Auto parts manufacturer Mando, which has sold a total of more than 150 billion won ($141 million) in products to Iran, saw its shares rise 1.72 percent to 147,500 won.

Most construction companies also gained, including Daelim Industrial, currently the only Korean builder working in Iran after winning its order in 2009.