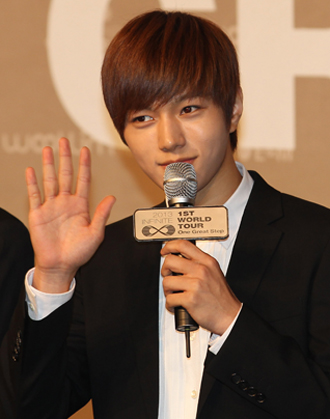 Woollim Entertainment said yesterday that L, a member of its boy group Infinite, was in fact dating Kim Do-yeon, the CEO of an online shopping mall, two months after the agency denied those rumors.

L, whose real name is Kim Myeong-soo, had been dating Kim for about four months, according to Woollim.

“The agency, to protect its artist, was not able to admit that the reports about L’s relationship were true,” Woollim said in a statement. “We are sincerely sorry.”

Woollim added that the rumors about L and Kim in September led to a lot of negative fan reactions. Combined with Infinite’s heavy touring schedule overseas, the couple eventually broke up.

“The two did not meet at all since September, and we hope no one gets hurt anymore regarding this matter, including L, Kim and the fans,” said Woollim.

Infinite is currently in London for its concert there today and will perform in Paris on Dec. 1, followed by Dubai on Dec. 6.