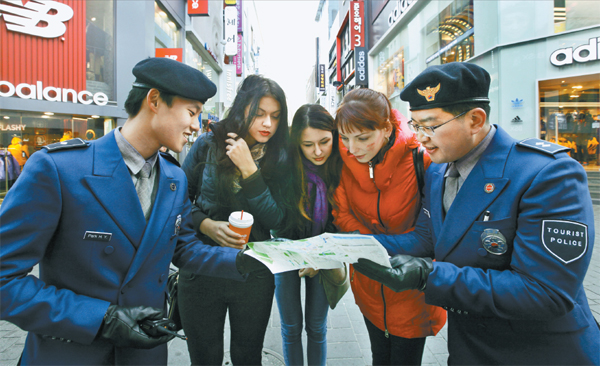 Since last month, in the tourist hub that is Myeong-dong, central Seoul, there’s been a sight drawing in tourists, making them stop in their tracks - before they start snapping away with their cameras.

It’s not the guy in the cat costume, or the one in a giant noodle box, and not even the zealous evangelist walking around with the sign that reads “666.”

In between these characters, you might catch a glimpse of two officers clad in blue, with sunglasses on and berets atop their heads at the center of furtive glances from tourists and locals that can’t make up their minds whether to be intimidated or amused.

No need to fear them, though. They’re part of the new tourist police force responsible for patrolling Myeong-dong, Itaewon, Dongdaemun, Insa-dong, Hongdae, Cheonggyecheon and the City Hall area.

The force consists of 52 regular police officers (15 of them women) and 49 military officers - the latter being drawn mostly from a pool of students who attended foreign universities or have lived abroad extensively.

The officers are here to serve, protect and point travelers in the right direction, and to offer on-site help in disputes among tourists, merchants and taxi drivers. Although they are unarmed, they have the authority to make arrests.

After pictures from the force’s inauguration ceremony made the rounds, some people questioned the recruiting process, asking whether only “good-looking” officers from the Seoul Metropolitan Police Agency were picked, adding confusion about the nature of their roles.

“It’s not based on looks, but you do have to be fit,” said Cpl. Cho Seung-cheol, who added that walking around constantly and being the helping hand and face of a nation meant that those selected were probably in better physical condition than some of their peers.

Working in pairs, with four officers on the day shift and four on the night shift and with walkie-talkies, they can communicate with headquarters.

“I think it’s half and half,” said Cho on how much he thinks the public and tourists are aware of the newly established squad.

But out in public, it’s clear that tourists and locals take note of every move that the officers make.

“I saw several [officers], just a couple of minutes ago,” said Rex Militello from Miami, adding that the tourist police looked just as approachable and friendly as anyone else on the streets of Seoul.

And because of their demeanor, every few minutes they are stopped by passers-by to pose for photos.

“Some come up to us and say, ‘Oh, so this is the uniform made by Psy’s designer,’” said Jeon Seung-hwon, an officer who wears his uniform with pride, although he admits he was startled when he first saw the uniform after years of serving as a regular police officer.

“It’s only embarrassing when we encounter ROTC members,” said Cho of the uniform designed by Kim Seo-ryong, who designed a similar costume for Psy for a performance at Rockefeller Center in New York. And when the officers put on their sunglasses, there is definitely a resemblance between them and the Hallyu star.

This isn’t surprising, given that the creation of the tourist police was a joint effort of the Ministry of Culture, Tourism and Sports and the Seoul Metropolitan Police Agency.

At any given time, a duo on their shift covers three or four languages: Each officer wears a badge on their lapel (red for Japanese, yellow for Chinese and blue for English) that denotes the language they speak.

“Seoul is not really a dangerous city, as you know,” said Jeong Ran-mi from the Ministry of Culture, Tourism and Sports. “But the tourist police are deployed to consumer-related crimes, like being ripped off.”

According to Jeong, the ministry had considered establishing a tourist police force even before the 2002 World Cup, “but it was only early this year that the ministry sat down with the police and the Seoul city government to see the project through.”

Last year, as the annual number of visitors to Korea surpassed 11 million, it seemed like perfect timing.

For years, the Korea Tourism Organization and hospitality industry officials were concerned about the fact that there was no instant police response when tourists were ripped off.

Jeong said that the mere presence of the officers may act as a deterrent to potential dishonest deals in the streets of Myeong-dong, where counterfeit goods are rife.

“When we walk around, you can see people straighten themselves. Even those sales assistants outside the cosmetic stores tone it down a notch,” said Cho.

“The nature of crime that we handle is very different; there aren’t really assault cases.” The worst thing that he’s seen so far was a case of a crooked merchant. 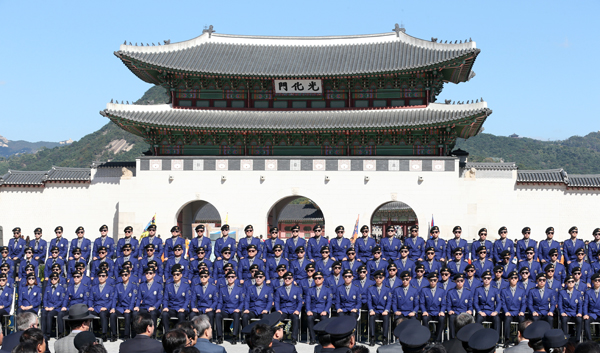 Tourist police officers at their inauguration on Oct. 16. Their uniform was designed by Kim Seo-ryong, who designed a similar costume for Psy for a performance at Rockefeller Center in New York. [JoongAng Ilbo]

Cho recalled hearing about an instance in which a group of merchants in Dongdaemun intimidated an elderly Japanese woman into buying a rabbit-fur scarf for 380,000 won ($358) when it was only valued at about 20,000 to 30,000 won.

After the woman informed her tour guide about the incident, the female tour facilitator approached the merchants, who gave the tourist an option.

“They said they’d only give her a refund if she got down on her knees and begged for a refund,” said Cho. And that’s when the tourist police stepped in.

“We went down there and got the refund for her,” said Cho, adding that he’s been lucky not to have seen any assaults or violent crimes while serving with the tourist police.

But even without the assaults, Yoon Seong-gu, a police sergeant with 15 years of experience in Seoul, said it was daunting to think that the way he serves tourists impacts how the world sees Korea.

“You know tourists come here, spend a little bit of time and go back home and then they’ll tell all their friends about their time here,” Yoon said about why he takes his new assignment seriously, although he admits by nature he’s not one to enjoy “meeting new people particularly.”

Cho said that the officers have to love people.

“A lot of police officers don’t think transferring to the tourist police is worth it - the pay is less and other benefits weigh out to be a lot less than the regular police,” said Cho, adding that it really was for those “who know a foreign language and want to use it on a daily basis.”

Ahn Kwang-sung, a Red Angel (volunteer tourist helper) has spent 17 months in Myeong-dong and although he doesn’t really come into direct contact with the tourist police on a regular basis, he said that he appreciated their help.

“The tourist police deal mostly with rip-off cases, which we have no control over, so it’s been helpful,” said Ahn, who will call the police on behalf of upset tourists and wait with them until the officers arrive.

But that’s not all that the police do. There have been times when they had to side with merchants who claimed to have been shoplifted by tourists. “Apparently it happens quite a lot,” said Cho.

“The fact is that all things aside, we are still the police,” said Cho, adding that one of the biggest dilemmas for the tourist police was that, “Yes, we are here to serve tourists, but we are also here to serve everyone in the public.”

Although the force has only been active for a month, Jeong said there was a significant drop in the number of complaints recorded at the KTO tourist call center from October 2012 to this October.

“Last year, we had 105 complaints in the month of October; this year, we had 81. That’s a 22.9 percent decrease,” said Jeong, adding that the KTO has also received countless thank-you letters from happy visitors on cases handled by the tourist police.

“Of course, it’s too early to connect the dots, but in the last month we did see a low crime rate in the area patrolled,” said a representative from the police agency. “I guess in the long term we will be able to tell if the tourist police do curb crimes.”

If all goes well and data attests to the success of the tourist police in curbing crimes and dissatisfaction among tourists, be prepared to see more of them around Korea. There are plans for establishing similar squads in Busan and Incheon.