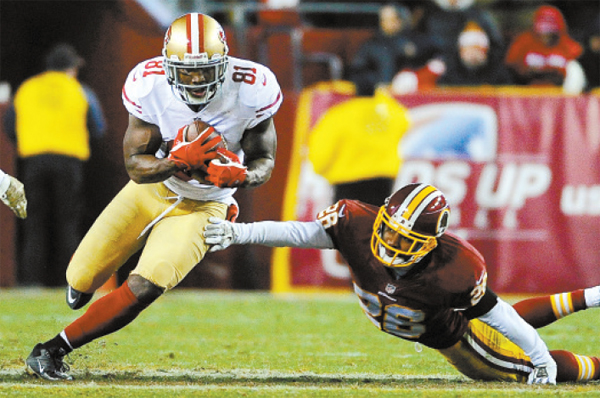 Kaepernick completed 15 of 24 passes for 235 yards - the first time in five games he’s topped 200 yards - with three touchdowns and no interceptions.

The Redskins bottled up Frank Gore (13 carries, 31 yards), essentially daring Kaepernick to throw the ball, and the QB responded by showing some veteran-like chemistry with veteran Anquan Boldin. Boldin finished with five catches for 94 yards and two touchdowns - a 19-yard grab at the pylon in the first quarter and a 6-yard reception in the third.

Vernon Davis also had a touchdown catch for the 49ers (7-4), who are tied for second with the Arizona Cardinals in the NFC West and are three games behind the Seattle Seahawks with five to play.

A loss would’ve put the defending NFC champions in trouble in their quest to return to the playoffs, but they’re nowhere near as bad off as the Redskins (3-8), who have dropped three straight and sit alone in last place in the NFC East a year after a late-season run that won the division.

Kaepernick and Griffin seemed poised to take the quarterback position to a new dimension last season when they wowed the NFL with their mobility. But defenses have adjusted, and the two quarterbacks’ stats have tumbled accordingly when they’ve been forced to throw in conventional drop-back situations.

Griffin’s fall has been more precipitous. He threw his 11th interception Monday night, more than twice the number he had all last season. He completed 17 of 27 passes for 127 yards and was sacked four times, and Washington tallied only 190 total yards. His throws were off-target, and the Redskins were again hurt by questionable clock management, including a timeout that was called while the clock was already stopped on a drive in the final minute of the first half.

The 49ers led 10-6 at the half, and the Redskins had their best chance to take the lead when they took over in San Francisco territory after a fumble on the opening drive of the third quarter. But, on a fourth-and-2 at the 41, Washington gave the ball to backup tailback Roy Helu, who was stopped short of the first down. The 49ers took over and drove for a score that gave them a double-digit lead for good.