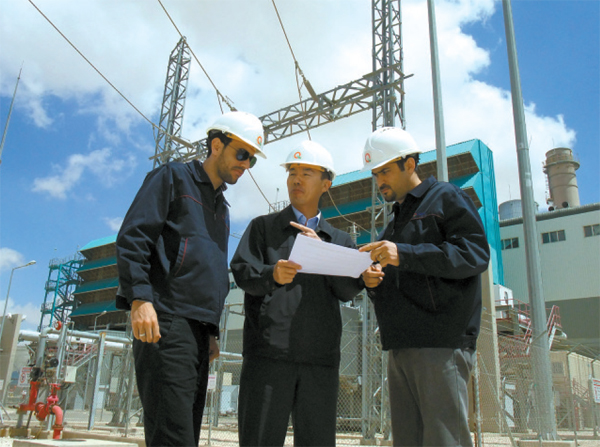 AMMAN, Jordan - “Thank God we have gas today!” a Jordanian employee says while staring at the main monitor hanging on a wall of the central control room at the headquarters of Qatrana Electric Power Company (QEPC), a joint venture between Korea Electric Power Company (Kepco) and Xenel of Saudi Arabia in Al Qatrana, 90 kilometers (56 miles) south of the capital of Amman.

A stable supply of natural gas from Egypt, which is about 30 percent of fuel used to produce power in Jordan, a barren land with no oil resources and a severe scarcity of water, is a key factor if Kepco is to build a reputation as a reliable supplier of electricity in the Islamic country.

“One of the difficulties in producing power here is securing a stable supply of fuels like gas,” says Yun Seok-bae, president of QEPC. He recalls recent attacks on Egyptian pipelines that caused about 14 explosions and disrupted the supply of natural gas.

“So we are closely monitoring geopolitical conditions of not only Jordan, but also nearby countries,” he said. 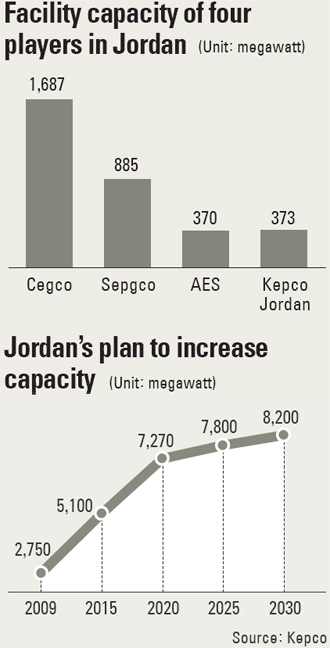 With a goal to become the second-largest foreign power provider in Jordan and expand into so-called second-tier countries in the Middle East, the Korean state-run electricity producer is at the forefront of efforts to enhance monitoring of the social and political dynamics of Arab countries and win the hearts of the people.

After completing the second independent power plant in Jordan in 2012, Kepco is building a third in Al Almanakher, 30 kilometers east of Amman. Slated for completion in September 2014, the new power plant with an annual capacity of 573 megawatts will give Kepco a total generation capacity of 946 megawatts, second only to Cegco from Saudi Arabia.

By then, Kepco’s market share in Jordan will more than double to 25 percent from its current 11 percent.

The electricity market of the poor country that has a per capita income of less than $5,000 is forecast to expand in coming years as the demand for power increases rapidly because of an influx of refugees from Syria and the creation of new industrial facilities as more and more foreign businesses enter the country.

The Jordanian government has a long-term plan to ramp up the nation’s power supply a total of 5,100 megawatts by 2015 from the current 3,366.

“Jordan is a strategic base for Kepco to advance into nearby countries that are expected to emerge as a new blue ocean market for global power producers in the next few years,” says Yun. “Being a key player in Jordan is crucial for Kepco, since we can track those countries so closely on a real-time basis.”

Kepco’s success in Jordan contributed to the company winning a 1,600-megawatt power plant order from the United Arab Emirates. The plant is under construction in Shuweihat, 260 kilometers west of Abu Dhabi.

“Our goal is to make direct inroads into their markets as soon as political situations improve there,” he adds.

For the next two and half decades, Kepco says it will be able to earn more than $11 million in annual net profit from its two power generation facilities in the country from next year, helping the heavily indebted public company improve its financial situation.

The company has faced fierce criticism in Korea for piling up nearly 95 trillion won ($89.6 billion) in debt, if subsidiaries are factored in.

Last week, the Korean government and Kepco increased electricity prices for households and industries by 5.4 percent on average.

In the meantime, the company has invested $ 96 million- in cash - in Jordan to build the power plants as part of its efforts to compete globally. The company refused to disclose the total amount of its overseas investment.

After its debut in the Philippines in 1995, Kepco today has 40 projects in 23 countries. It earned 1.5 trillion won from its overseas businesses last year.

“Overseas businesses are significant for Kepco to help offset future increases in power bills domestically, since Korea’s demand for electricity is growing at a slower pace than before,” says Lee Tong-seung, vice president of corporate communications at Kepco. “To succeed in the Middle East market, close networks with officials of the local industry and government are more important than anything else.”

Ever since Kepco jumped into Jordan in 2008, it has been working hard to build relationships.

“We have established strong bonds with local officials and potential clients here,” says a Kepco executive working in Amman. “We put a lot of effort into understanding Islamic culture and temperament. For example, they hate losing face, so we respect that and try not to cause trouble in that sense.”

Kepco’s Jordan branch also is trying to expand access to power to undeserved parts of the country.

“Along with Hyundai automobiles running on the streets of Jordan and Samsung smartphones in the hands of many local people, Kepco is trying to elevate the country’s image and status by fulfilling various corporate social responsibilities,” says Yun.

The company regularly checks circuit boxes of nurseries for disabled children and provides medicine for Bedouins living in the desert.

In the Zaatari refugee camp, Kepco supplies power for about 120,000 Syrian refugees.