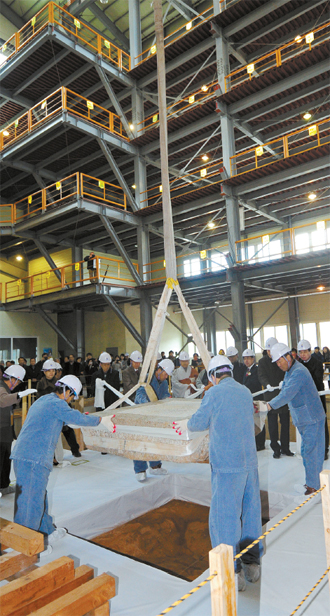 Workers hoist the foundation stone of the Stone Pagoda of Mireuk Temple (Korea’s National Treasure No. 11) yesterday at Iksan, North Jeolla, the start of the restoration of the pagoda. Believed to be created in the seventh century, the later years of Korea’s Baekje Kingdom (18 BC-AD 660), it is the country’s oldest and largest stone pagoda. After a safety checkup, authorities decided to restore the pagoda in 1998. Dismantlement and archaeological excavation took place between 2001 and 2010. The restoration will be completed in Aug. 2016. The 19.5 billion won ($18.4 million) project comes as Korea’s cultural heritage authorities are in the hot seat for careless handling and restorations of the country’s wooden and stone treasures. [NEWS1]