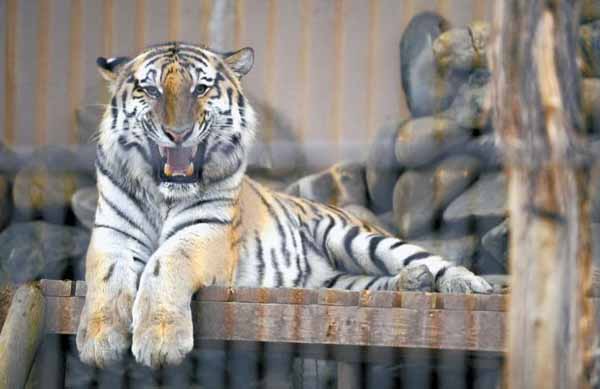 A 3-year-old Siberian tiger sits in a cage after attacking a zookeeper on Sunday at the Seoul Grand Park in Gwacheon, Gyeonggi. [NEWSIS]

A zookeeper at a wildlife park is in serious condition after a tiger that escaped its enclosure pounced on him and bit him on the neck Sunday, said the Seoul city government, which is in charge of overseeing the management of the Seoul Grand Park in Gwacheon, Gyeonggi.

The 52-year-old zookeeper surnamed Shim was placing food in a staff area when the 3-year-old Siberian tiger crept up behind him.

The tiger was able to enter the area because staff members allegedly left a gate open that leads to it. Under the zoo’s safety rules, however, animals should not have had access there.

Shim was found lying on the ground by a stall woman and later taken to a hospital. He remains in serious condition in an intensive care unit at Ajou University Hospital in Suwon, Gyeonggi.

Shim is a veteran zookeeper with more than 20 years of experience at the zoo and had worked at the insects’ habitats until last year.

The park said that the tiger re-entered its habitat about 30 minutes after the attack and didn’t harm any visitors.

However, the incident raised doubts whether the animal park is negligent about safety.

The height of the fence in the staff area is 1.4 meters (4.6 feet), which is much lower than the height of an average adult man. Zoo visitors walk along the area outside of the fence.

Park officials said that the fence is lower because the compound was originally designed and used for foxes, adding that it plans to raise the height of the fence to 5 meters.

“The tigers temporarily stayed there because the tigers’ cages are under reconstruction,” Ahn Young-no, Seoul Grand Park’s director, said yesterday. “But we should’ve installed higher fences when we took the tigers to the new habitat.”

Under the safety rules, at least two zookeepers are supposed to enter a cage occupied by wild animals such as lions, crocodiles and tigers in order to better deal with emergency situations.

When asked why there was only one zookeeper feeding the tiger, Ahn said the other zookeeper was in the pumas’ habitat, where some of the tigers are staying temporarily. The zoo has more than 10 tigers.

“As the tiger cage is under construction, tigers are now separated in different places, so the two workers couldn’t enter the cage together,” Ahn said.

The director vowed to strengthen safety measures such as the installation of surveillance cameras and regular safety checks. Other measures are also being considered.

Park officials have yet to verify whether other physical or circumstantial aspects led the tiger to maul the worker, adding that the Gwacheon Police Precinct is investigating.

The tiger has been taken off exhibit and park officials are discussing how to deal with the animal.