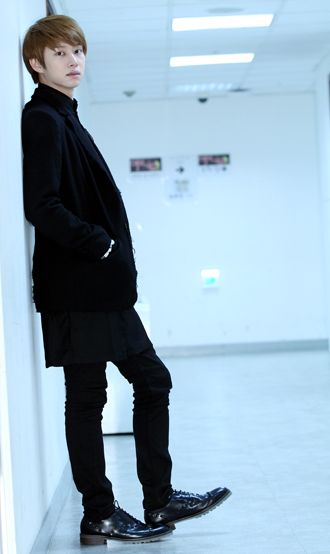 Unlike many K-pop stars who constantly watch everything they say in the media, Kim Hee-chul of the boy group Super Junior does not seem to worry much.

After being discharged from his mandatory military service in August, Hee-chul joined the entertainment talk show “Sseoljeon,” on cable channel JTBC, discussing hot, celebrity-related news with critics and entertainers.

Sometimes the 30-year-old singer speaks up for idol groups, saying how hard the life is, but other times he can be more straightforward, even criticizing his own agency SM Entertainment.

“I have become a target of criticism due to the comments I made on the program, but I don’t care much,” said Hee-chul in an interview with Ilgan Sports, an affiliate of the Korea JoongAng Daily.

“I don’t want to say something that isn’t true just because I’m scared of getting criticized by netizens, and my agency knows that I always stay within the limits.”

Q. What have you been enjoying since you were discharged from the military?

A. I’m much brighter. I am happy that I get to do the things I wanted to do but wasn’t able to for two years. Because my military service was [working] as a civil servant, that drove me even crazier, being a part of society but not allowed to do the things everyone else can, such as drinking and partying. Someone would report me even when I went to a PC room to play games or ate lunch outside.

How did you use public transportation while serving your military duty?

I put my head down and rode the subway, never looking up until I got off. I counted how many stops the train made and then quickly got off. There were a few times people recognized me, but I didn’t say hi back because I worried that they would continue talking to me. I could have used my car, but in that case I had to wake up 30 minutes earlier, so I used public transportation.

Isn’t it hard to discuss entertainment news, since you have to talk about people you know or work with?

I think I don’t mind being the target of criticism, but being on the program does hurt your network of friends. It is true that talking about someone you know is uncomfortable and difficult. Frankly speaking, I don’t mind being asked by producers to leave, as I think my friends and my network is more important. I don’t want to betray them just to stay on the program.

How do you feel about your eighth year since debuting as a member of Super Junior?

Nothing special. I had a ‘Wow! We’ve survived five years’ epiphany when we celebrated the fifth year, but the eighth year didn’t seem so big.

Are there any rules Super Junior members have for the group?

Yes. We have promised that we won’t let women complicate things. When one member points at someone while watching TV and calls dibs, the other members cannot approach that person, even if the guy who called dibs doesn’t date her. That might seem really silly, but how that woman thinks isn’t important. All the rights go to the member who called dibs on her first.

Are you surprised that your group’s concert, ‘Super Show’ has become such a big brand?

There weren’t that many people about two years ago when we held concerts overseas. We recently had a concert in Osaka, Japan, and 90,000 people came. I was shocked. After I completed my military service, ‘Super Show’ became very big.

New music? Hot looks? I don’t need those things. I just want Super Junior to last a long time. We have been cool and cute, and we gained global popularity with songs like ‘Sorry Sorry.’ Now the goal is for the group to stay together without making anyone uncomfortable, so everyone enjoys it. I have been sharing everything with the other members since we were young, and I don’t want to imagine being separated from the people who know me the best. I may not be the best singer, but I have done many of the things I wanted to do, so I don’t have any personal goals. I just want the group to last.