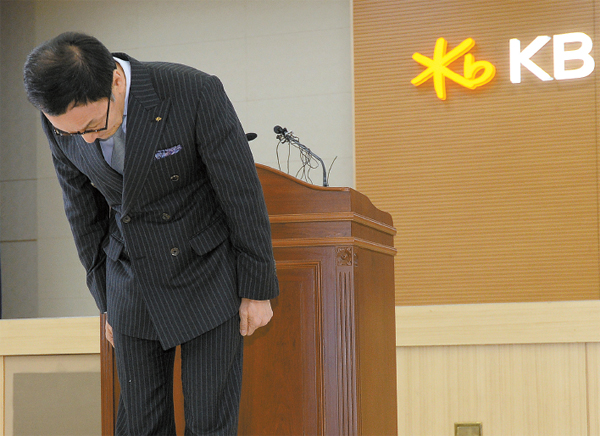 The president of one of the nation’s biggest banks finally made a public apology yesterday as controversy surrounding numerous alleged business practices and embezzlement continues to grow.

“As the president of the KB Kookmin Bank, I fully feel the responsibilities of the unfortunate accidents that have occurred recently and would like to make a sincere apology to the public, along with the 22,000 employees, with our heads bowed down,” said Lee Kun-ho.

“[The accidents] should have never occurred as a bank whose existence is based on customers’ trust. We will do our best to cooperate with the authorities to clarify the accusation and we will strongly push for a fundamental reform.”

Despite the public apology, the embezzlement of 9 billion won ($8.5 million) in housing bonds turned out to be much larger than the initial findings. According to financial authorities, the estimated amount of the embezzlement is now believed to be more than 10 billion won and the number of people involved were not two, but at least five. There is even speculation in the industry that number of people involved end up being 10 or more.

The special auditing team that visited the bank’s headquarters in Yeouido, southwestern Seoul, on Tuesday already confirmed that three people involved included an employee whose surname is Park. The finding by the auditing team of the Financial Supervisory Services contradicts the initial finding made by the bank that attributed the embezzlement only to Park.

The bank in its finding said that Park, who had worked at the housing fund department from 2009 until recently, collected 9 billion won by forging national housing bonds. Another employee from a different branch was said to have assisted in the liquidation of the bonds.

With new findings said to be rolling out, the investigation is expected to spread to other branches of the bank. The prosecutors’ office started its own investigation regarding slush funds reportedly created at KB Kookmin’s branch office in Tokyo.

It has been reported that the bank’s branch in Tokyo created slush funds with commissions made from illegal loans to Korean companies operating in Japan over the past two years. The Tokyo branch is accused of handing out illegal loans amounting to 180 billion won.

The 2 billion won that the bank made from the illegal loans to 20 Korean companies was then laundered and returned to the country. The slush fund was said to been used to purchase 500 billion won worth of gift coupons.

The investigation is said to be focused on whether management from headquarters in Seoul directed the creation of the slush fund and where those gift coupons were used.

The bank is also accused of generating massive losses due to mismanagement at its branch in Kazakhstan.

Meanwhile, Shin Je-yoon, Financial Service Commission chairman, raised concerns about the growing controversy at KB Kookmin Bank, adding that there are a lot of problems with its internal regulation system. In fact, the employee embezzlement was said to have been exposed not by a regular audit by the bank, but by a whistle blower.