Leverkusen no match for Manchester United

Leverkusen no match for Manchester United 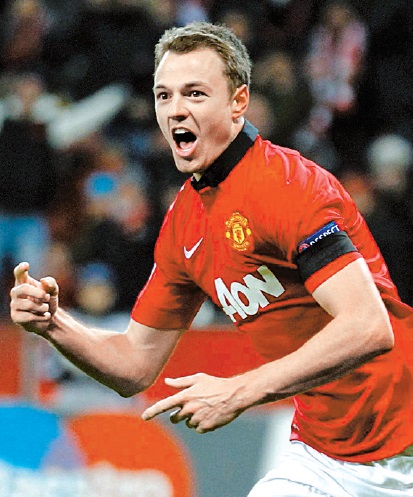 Manchester United’s Jonny Evans celebrates after scoring against Bayer Leverkusen during their match at the Bay Arena Wednesday. [REUTERS/NEWS1]

Wayne Rooney set up three goals as Manchester United cruised to a 5-0 triumph at Bayer Leverkusen on Wednesday, booking their Champions League knockout stage spot and snapping the Germans’ eight-game home winning streak in the competition.

Rooney tormented Leverkusen with pinpoint passes, having a hand in four goals in all, in what was United’s biggest away victory in the European Cup in over half a century since a 6-0 demolition of Shamrock Rovers in 1957.

He found Antonio Valencia with a deep cross for an easy tap-in before floating a free kick into the box which defender Emir Spahic headed into his own net in the 30th minute.

Jonny Evans added another after taking advantage of some confusion in the box and Chris Smalling scored in the 77th before a cute Nani finish made sure of English clubs’ fifth win in seven matches against German teams this season.

“This is probably the best performance of the season, the best we played in my time here,” said United coach David Moyes, whose domestic results have been mixed since succeeding Alex Ferguson in the offseason.

“For us to come away from home and score five goals is special. Wayne was very good tonight. There were so many great performances. That is what I was hoping to get more often this season. There are signs that we have been getting better.”

The win lifted United, which was playing without injured Nemanja Vidic and Robin van Persie, to 11 points in Group A, three ahead of Ukraine’s Shakhtar Donetsk, with Leverkusen in third with seven.

A win or draw against the Ukrainians at home in the final group game on Dec. 10 will guarantee the English team a top spot.

“We really killed them on the counterattack and it was a pleasure to play behind the front four,” midfielder Ryan Giggs, who will turn 40 in two days, told Sky Sports.