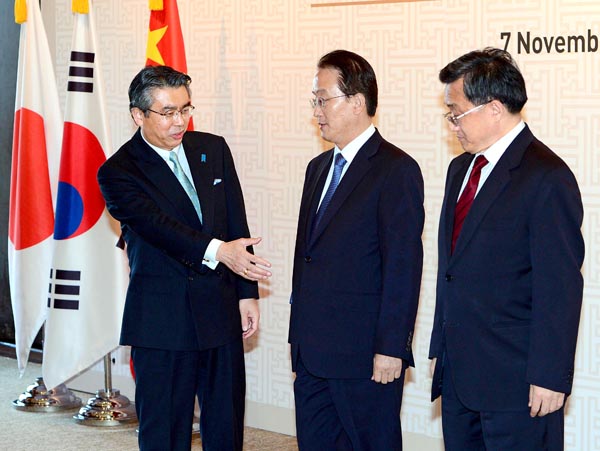 In a report on South Korea earlier this year, McKinsey & Company likened the Korean economy to a frog in a pot of slowly boiling water. It may be in obvious and grave danger, but the Korean people don’t sense it as the water’s temperature gradually rises. What the Korean people are most gravely insensitive to is the imminent security threat facing them.

China is turning more and more blatant in exposing its ambitions for global leadership and shaking the geopolitical dynamics of East Asia in the process. It is trying to replace U.S. predominance and realign the regional order based on its newfound economic wealth.

The United States, of course, won’t just sit around and let China steal its long-held power in the region. Based on its so-called pivot to Asia, the Obama administration is cementing ties with China’s rival Japan by drawing the latter into the Trans-Pacific Partnership, a Washington-led free trade framework that excludes China, and strengthened military ties by endorsing Tokyo’s plan to rewrite its pacifist Constitution and push forward with its right of collective self-defense. The scaling up of Japan’s military might and mission is part of the country’s multi-dimensional efforts to contain China’s widening influence in the region. Japan, which had to swallow its pride after watching China become a larger economy than itself, is more than happy to climb into this marital bed with the United States to take on China.

South Korea is sandwiched in the middle and cannot help but feel pain from all sides. The United States, which has been a patron to South Korea on both the security and economic fronts since the 1950-53 Korean War, is beckoning Seoul into the same bed. Korea can’t help feeling like it’s being chased by a creditor. Washington repeatedly advises Seoul to get along well with Tokyo, which does nothing but thumb its nose at its neighbors. China condescendingly warns that it is now South Korea’s largest trading partner, and you know what kind of leverage that provides.

North Korea enjoys South Korea’s dilemma. It ratcheted up its violent rhetoric toward the South, sneering at the sight of poor Seoul being pulled in opposite directions. Japan may not be that extreme, but it, too, appears to be taking secret pleasure at the sight of South Korea scrambling.

South Korea is caught in the crossfire, as it so often has been in the past. But our leaders appear to be living in either a different country or on a different world, oblivious to the dangers closing in on the country. Politicians are too engrossed wrangling over outdated ideological issues to have any time to notice the alarming signs. The government is mute and absent. Few talk about the looming crisis in fear of upsetting the president.

The president is equally unreliable. We hear no clearly articulated reply to the bossy and irksome stands of our neighbors, which are global powers. She seems strangely nonchalant. The only news we get from her is about her elegance demeanor and dress, and her proficiency in foreign languages when she travels overseas.

Xiang Yu, a key military leader who helped topple the Qin Dynasty of China, committed suicide after sensing ominous signs of defeat in the Chu-Han war with his opponent Liu Bang. The same apocalyptic symptoms were apparent at the end of the Joseon Dynasty (1392-1910).

South Korea today has a global status that would have been impossible to imagine by the people of the late Joseon times. Korean people have become famous for their ingenuity, enterprise and openness. The country is an advanced country. Today’s global powers and our neighbors, even including North Korea, are no longer imperialistic and greedy for conquest.

Still, if our leaders continue to turn deaf ears to the baleful signals from abroad, we can’t be confident of our safety. Nothing is secure forever, including our alliance with the United States. Can North Korea stay viable without nuclear bombs? Can China be as reliable an ally as the United States? How long will Japan go on annoying us? We must wake up and do some brainstorming. We must explore the possibilities with imagination until we reach answers and solutions to our problems.