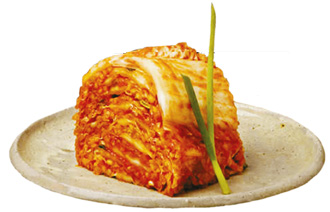 Noh Jung-hee is too old to make 40 kilograms (88 pounds) of kimchi by herself, but she ordered four boxes of salted Napa cabbages this year. On the day when she did her kimjang, which refers to the kimchi-making process, last week, her small living room was full of stacks of cabbages and huge buckets of marinade mixture, which usually consists of dried red pepper powder, fermented fish sauce and all sorts of vegetables.

Making kimchi wasn’t easy for the 84-year-old grandmother. She groaned whenever she stood up to grab some condiments as she stuffed the marinade mixture between cabbage leaves.

Her three grown-up children keep telling her to stop making kimchi, but she thinks kimjang (also spelled as gimjang) is something she can’t easily give up.

“It’s a lie if I say it’s not hard at all, but I want to make my kimchi until I can’t afford to do it,” said Noh, a long-time resident of Gwangmyeong, Gyeonggi. 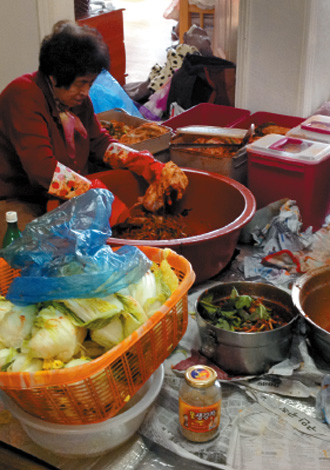 Many traditional rituals have disappeared, but the culture of making kimchi, or kimjang, is still upheld by many Koreans. Noh Jung-hee, 84, still makes kimchi by herself and shares it with her grown-up children and neighbors. By Sung So-young

In order to make the job easier, Noh started ordering salted cabbage two or three years ago from a kimchi factory. Otherwise, it takes a full day to salt the cabbages, which is the most important part of making kimchi. By sprinkling salt over the cabbage leaves, it makes them tender enough to become kimchi. But one has to wake up every two hours to move the cabbages around to make sure they are evenly salted and squeeze the water out of them.

“But it’s a pleasure for me to give out kimchi to my children,” added Noh as she filled several containers with decently wrapped kimchi.

On that day, she made enough kimchi to fill 10 deep containers, each one capable of storing about 8 liters (2 gallons). Of the 10, only four were hers.

“One goes to my son, another one goes to my daughter and the other four go to my granddaughter. She has no one to make kimchi for her because my first daughter died years ago,” she said.

There was a small container of kimchi, too. Noh said she will share it with her church friends on the last day of her origami class at the church.

“I used to make kimchi with neighbors until a few years ago, but I don’t do it anymore. If they help me, I have to give them a helping hand, too, but I’m not alive and kicking enough to do that.

“But it was a lot faster when we did it together. We also ate fresh kimchi and boiled pork together between work,” recalled Noh.

Noh doesn’t do kimjang with her neighbors anymore, but she still shares her kimchi with her family and neighbors, and the kimjang culture is likely to be registered as an Intangible Cultural Heritage this week by Unesco.

“Fewer and fewer people get together and make kimchi together due to urbanization,” said Bak Sang-mee, a professor of international studies at Hankuk University of Foreign Studies. She has been preparing all the documents for the registration of kimjang culture over the past year, working with other members of the Cultural Heritage Administration. The document is titled “Kimjang: Making and Sharing Kimchi.”

“The form of kimjang has changed over time, but people still do kimjang. And local communities also do large-scale kimjang, too,” Bak said. “We tried to show how the kimjang culture is still alive in modern Korea with its core spirit - making and sharing - remaining intact.”

Scale of tradition gets smaller

Of the many ungraceful nicknames Korea has, one of them is probably “the apartment republic.” The first apartment complex that appeared in Mapo District, central Seoul, in 1962 received a less-than-enthusiastic welcome. One of the reasons was due to kimchi.

Many complained there was no place in the apartments to bury their jangdok, or the earthenware pots, used to store kimchi.

In a half-century or so, however, the concrete slabs have come to dominate Seoul’s skyline.

The country also underwent dramatic social changes such as a shift from four-person households to single-person households. The government promoted a two-child policy in order to prevent people from having more than two children in the 1970s, but now it says the more the better.

Things have changed. Fresh green vegetables can be bought at any time of the year and there are plenty of things to eat other than kimchi. But Koreans still stick to the long tradition of kimjang, which usually takes place between November and December.

People also don’t make kimchi with 100 or 200 cabbages, like they did in the past. The scale of kimjang has become smaller as one household makes kimchi with an average of between 20 and 40 cabbages, meaning one or two women can manage kimjang like Noh did. But the kimjang culture has survived the turbulent modern history of Korea.
According to a survey that was conducted among 500 members of a forum on Azoomma.com earlier last month, 73 percent of housewives said they wish to do kimjang by themselves this year.

“There were many winter rituals such as renewing roofs and preparing firewood. Kimjang was one of them,” said Kim Jong-dae, a professor of folklore at Chung-Ang University.

“Many such rituals have disappeared, but we still do kimjang. That is because people hardly change the way they eat,” Kim said.

As Kim said, kimchi is ubiquitous on Koreans’ dining tables. It is served with almost everything, from a bowl of instant noodles to a plate of steak.

The tradition of making kimchi has weathered the ups and downs of history, including the advent of new technologies.

“Next-day delivery service and kimchi refrigerators made it possible for Koreans to keep the tradition of kimchi-making and sharing,” said Joo Young-ha, a professor of folklore at the Academy of Korean Studies.

But the first kimchi refrigerator, made by Daewoo Electronics in 1984, flopped. Back then, most people still lived in houses with front yards or backyards in which to bury their kimchi.

In 1995, a new kimchi refrigerator hit the market, the Dimchae, made by Mando (now Winia Mando). The manufacturer wanted to break into the business-to-consumer electronics market, but the market was already dominated by Samsung and LG Electronics. Mando eventually developed a kimchi refrigerator as a niche market targeting housewives living in apartment buildings. Dimchae became an instant hit, and the brand even became a generic term for kimchi refrigerators.

In addition to kimchi refrigerators, numerous kimchi factories that sell salted cabbages have also sustained the culture of kimchi-making.

About 3,000 delivery women from Korea Yakult participate in a mass kimjang on Nov. 13. The kimchi goes to needy people. [JoongAng Ilbo]

In Seoul and Gyeonggi, people hardly gather for kimjang, but churches, civic groups and private companies do mass kimjang for charity.

Korea Yakult, which produces dairy products, is one such group. The company is famous for its mass kimjang, now in its 13th year.

This year, 250 tons of cabbages were used.

“It was first stared from one delivery woman living in Busan,” said Lee Seung-gi, who is in charge of the group kimjang at the dairy producer. “That Yakult ajumma realized that many people, especially seniors, had a hard time doing kimjang for themselves. Thus, she made kimchi and gave it away to people who need kimchi.”

Mapo Hope Sharing, a group based in Mapo District, central Seoul, has been doing group kimjang for the past eight years. Seventy people were involved in the Nov. 9 event.

Anyone who is interested in group kimjang can participate by paying 10,000 won ($9.42) per cabbage. If someone needs five, she makes five kimchi for herself and another five to donate to her neighbors who are in need of kimchi by paying 100,000 won. “We make kimchi for ourselves but for others, too,” said Seol Hyun-jung, an official who is in charge of the group kimjang. “The motto of kimjang is live and eat well all together, after all.”